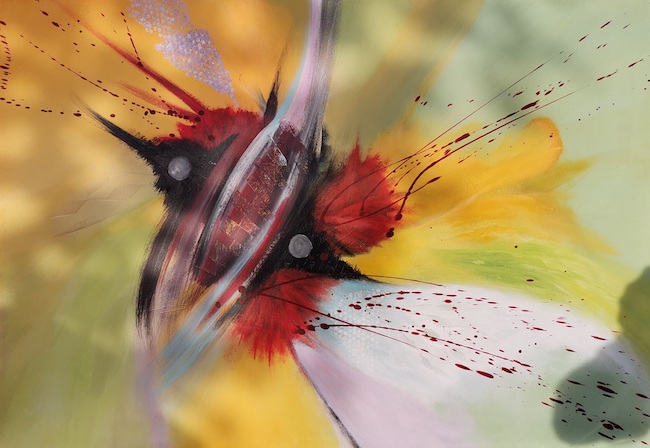 Modern art’s scene has in many cases marked a deep split with everything that had been before, transforming painting sometimes into an act distant from the interior and sometimes into an essential manifestation of the essence, emotions and deep feelings of the author of an artwork. Today’s protagonist is linked to that group of artists for whom communicating and expressing is closely linked to the concept of making art.

In the twentieth century Abstractionism movement generated a clear fracture with all the artistic production both of the more classical past, from the Renaissance to Romanticism passing through Realism, and with the artistic currents closer in time, which in turn had brought stylistic innovation in the representation of reality, such as Cubism, Surrealism, Expressionism, but which, however, still remained too tied to figuration, to defined form, although decomposed or internalized. Abstractionism set itself the objective of erasing the link with visible reality and suggesting concepts through the use of forms, lines and colours, in which nothing was to lead back to what the eye knows to induce the observer to go further and connect with the author’s intention. Intention that in the case of Geometric Abstraction had to be devoid of emotion and the most intimate voice, bringing the work to the level of pure rational aesthetics without involvement on the part of the artist, while in Lyrical Abstraction and Abstract Expressionism the cancellation of figuration was, on the contrary, functional to highlight the pure manifestation of an interiority that had to connect with the viewer of the work. Wassily Kandinsky was the first to theorize the importance of the canvas as a means of narrating sensations precisely by virtue of the renunciation to figuration, because inner feeling, personal expression, did not need the defined and realistic image to be manifested, just as the renunciation of the representation of reality did not need to be associated with the lack of pathos in the works.

Eva Watzl, a self-taught Austrian artist, belongs to Lyrical Abstraction while giving her style a perhaps more poetic sense if compare to that of her predecessors of the last century, softening the forms and spreading the colors in a less impulsive, more moderate, soft way, to explore and question the world of nature, the universe of a spirituality that can manifest itself with different shades, the objects that capture her imagination or present themselves in front of her curious gaze.

In the work Space craft is palpable all the fascination that an invention far from everyday life rouses on the artist, somehow metaphorical of a desire to escape from reality, to abstract from the contingency to explore a different world because observed from above, from an unusual and unexpected angle; the colours are bright, sunny, as can be the excitement of discovering something new, of the outside but also of the interior that reveals itself in front of the unknown, and the energy Watzl felt in front of the canvas comes out of it to envelop the observer.

Also belonging to the world of science is Big Bang, which in the artist’s imagination is not as black as the original explosion surrounded by the darkness of the universe, but rather colourful, life-giving, the hope of a positive principle from which everything sprang and which therefore could not fail to have the bright, dense tones of an early existence. A positive approach emerges from Eva Watzl‘s works, a smiling look at everything she chooses to make the protagonist of her artworks, an empathic openness to nuances and different points of view, the ability to observe things from a multifaceted, prismatic perspective, thanks to which she is able to explore the multiple options of life, individuality, events. She recounts the elements of nature as much as those of human interiority, all united by the fundamental presence of bright colours, strong hues at times similar and at others contrasting precisely to give a sense of plurality and the facets that change on the basis of those who observe those realities.

The work Circulus virtuosus is a clear example of how important in Eva Watzl’s Lyrical Abstractionism is the voice of strong, decisive, little nuanced colours, precisely to give the sense of that whirlwind of emotions with which the individual finds himself having to deal with and which, if lived in an intense and positive way, contribute to generate that virtuous circle of which the title speaks, where differences and oppositions do not generate a detachment but a complementarity within which each force increases the immediately contiguous one.

The canvas The fiber of silk narrates all the delicacy, the softness of a a fibre, silk, which hides Watzl‘s exhortation to embrace more moderate tones, to let ourselves be lulled by the slow rhythm of simple things but basically of great importance for the balance towards which we tend; the tones are soft, shaded to instill a sense of reassuring envelopment, that shell inside which we need to feel safe and from which we can start to face what is outside with greater security. Although she began her artistic training in an instinctive way, Eva Watzl over the years has attended many specialization courses that allowed her to learn the use of different materials such as fabrics, glass, clay, and then complete the apprenticeship through which she was able to access the teaching of PanArt, a particular type of painting technique with acrylics; she prefers painting but is also dedicated to the production of porcelain dolls, teddy bears and felt puppets. During her career she has participated in many group exhibitions in Austria, Germany, Hungary, China and Italy and she has held courses and seminars for art and craft teachers. She is a member of the AKU art group in Weiz, and since 2019 a member of the TraunArt art group in Traun.