Home Lifestyle Journey between the present and the past in the cities and boulevards...
Facebook
WhatsApp
Twitter
Linkedin 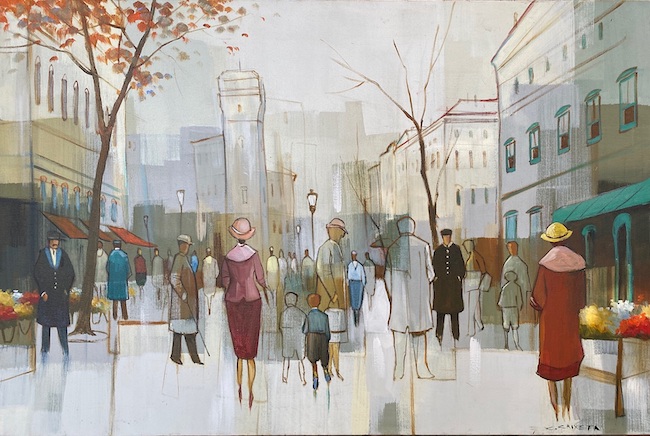 Time exerts a particular fascination on contemporary artists, both when it eludes the future allowing them to idealize and glimpse possible scenarios, and when it turns towards a more or less recent past that constitutes the basis and starting point for the present reality and becomes a nostalgic sheet with which to wrap the present. Today’s protagonist skillfully manages to remain hovering between these two realities as well as to create a personal style that is the result of a fusion of different forms of expression.

Modern Brazil has undergone all the European influences in art precisely because of the mixture of cultural roots and contacts with the countries of origin of a large part of its population, so even in the artistic path of the twentieth century there are many currents that have characterized it and that inspired the European avant-garde. The Brazilian Modernism of Tarsila Do Amaral left part of the stage to the Expressionism of Candido Portinari, the search for pure Brazilian style with ties to the South American Naif and Afro-Brazilian atmospheres of Emiliano di Cavalcanti was flanked by the Geometric Abstractionism of Ivan Serpa, therefore a world as varied and in ferment as that of distant Europe. In particular, it was Portinari and Hector Bernabò, aka Carybé, who left a deep mark in Brazilian painting, the first one for his freedom from the rules and for having been able to reinterpret and tell with lightness but with extreme sincerity, the world that revolved around him, the people he saw and met in the places he frequented and whose spontaneity and episodes of daily life he wanted to immortalize; the second for his modern and stylized pictorial approach while remaining strongly linked to the traditions of Brazil, from Candomblé to the scenes of life and folklore of Rio de Janeiro, which he recounted in their entirety, almost omitting faces to narrate the sense of aggregation that accompanies the life of the carioca. Claudio Borges Caixeta, original from the state of Goiás in central-western Brazil, has the same expressive lightness as Portinari and the same stylization of Carybé‘s characters, while elaborating a completely personal pictorial style both for the themes treated and for the artistic movements to which his works are linked. What strikes the artist’s attention is the good living, the pleasure of walking in the great tree-lined avenues, of spending time with friends, of attending a ballet, with an all-European taste of refinement and innate elegance.

These are the moments impressed in Caixeta‘s paintings, in which cities like Paris and Lisbon are the protagonists, episodes suspended in time in an impalpable atmosphere that evokes in the observer the uncertainty of being in the moment of today or in that of a distant and yet so close memory. In some canvases the brush is laid in a soft, evanescent way, almost in the impressionist manner, even if one of Caixeta‘s characteristics is the evident stroke of the drawing, an element that is far from the theme of Impressionism.

However, the late nineteenth-century movement is linked both to the choice of the subjects reproduced, to that plein air and joie de vivre that distinguished the canvases of Renoir, Monet and Degas, and to the sensation, the impression that manifests itself in the astonished observation of the images before his eyes and that emerges from each of his subjects.

In a certain way, precisely because of that clear line of the drawing and the way in which he spreads the colours outside the lines with which he gives body to the figures, he approaches the poetics of Expressionism, as well as that sense of suspension between what is and what has been, that silent voice that rises from the crowded streets and buildings that is whispered by the artist through lines, figures and contours barely hinted at, not filled with color, not openly manifested, as if to imply how everything can change but also remain the same as time goes by. And how, after all, everything that is part of the present is the important origin from which it was born, that furrow which constitutes the awareness of the individual as well as of the people.

The strong stylization of the human figure seems to want to emphasize the fascination that the multitude exerts on Caixeta, a living in sharing spaces and places that does not want to cancel individuality but to define the boundaries within a world, a much larger personal universe made up of daily encounters, of people who are linked to the existence of each one, of others who enter and leave, to affirm the importance of sociality throughout the course of existence.

The romantic atmospheres envelop the observer as much as that constant passage between the the life of today and that of the past, narrated through that underground transparency that testifies to the previous presence of existences, of individuals who have made the same gestures, walked the same streets, observed the same buildings probably getting excited in the same way because after all, emotions have no time and know no boundaries, they are always there hovering around life. Claudio Borges Caixeta is a well-known artist in Brazil but also abroad because his artworks are part of private collections in many countries of the whole world including Europe, Latin America, North America and Asia; he has had many solo and group exhibitions in his country, the two most important took place in Brasilia, while abroad he has been protagonist in Paris, Rotterdam and Anwerpen (Belgium). He is represented by the major art galleries of Goiãnia, Brasilia, Florianópolis, Vitória, Curtiriba and San Paolo.