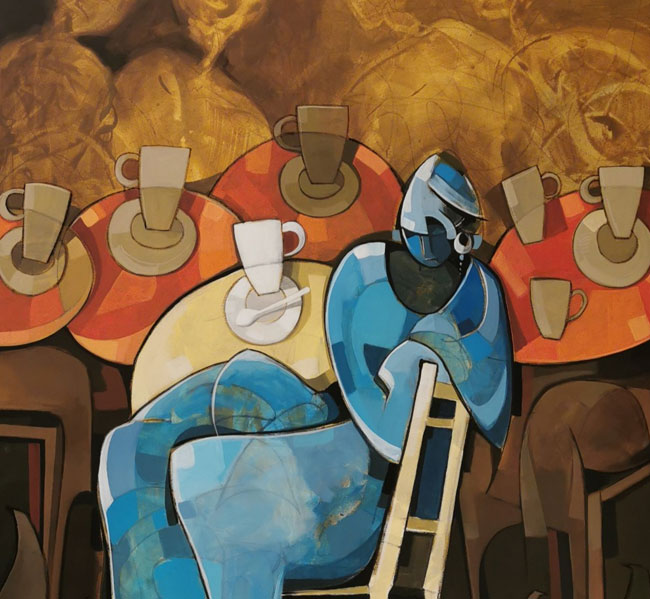 Some typical features of pictorial movements of the last century seem to have been set aside by many contemporary artists precisely because of the current need to dig deep into the human soul, which often appears disoriented and lost within a daily routine that tends to leave the essence behind. Today’s protagonist makes a return to the guidelines of artistic currents of the past and merges them, masterfully, with others in some cases seemingly divergent to create an absolutely unique genre.

All European art, especially French one, of the late nineteenth century and most of the decade before the beginning of the First World War, with Art Nouveau and Impressionism celebrated the joy of living, the new economic possibilities resulting from the important technological achievements that were making a significant contribution to a revolution in the way of working and approaching everyday life, possibilities thanks to which the population could benefit from the amenities that allowed them to appreciate fun, beauty and pleasure an end in themselves. Not only the works of Toulouse-Lautrec, who loved to wander around cabaret and pleasure houses and reproduce scenes from their interiors, making protagonists women who would otherwise only be in those sinful rooms, but also Renoir, whose scenes of parties, dancing and entertainment are world-famous and succeed in instilling in the viewer a feeling of well-being and carefreeness in the characters he depicted.

At the same time, other movements were born, more oriented towards research, analysis and modernism, where the previous two currents remained more attached to tradition, even though they bypassed it in technique; the first works belonging to Georges Braque‘s Cubism, which scandalized Henri Matisse, also date back to the early twentieth century. Jaber Khudhair, a Kuwaiti artist, has managed to achieve a fascinating synthesis between the tendency to recount moments of joy of living, small convivial moments in which the beautiful sensations emerge not only of leisure but also of simple, delicate, serene feelings, and the technique of decomposing the image through geometric shapes typical of Cubism, in which, however the earthy tones of Braque are replaced by brighter, more cheerful colours, closer to the artist’s vision of life.

The Cubist style is somehow mixed with Umberto Boccioni‘s soft Futurism, precisely because of those more delicate, less squared, more rounded geometries, more pertinent to the sweetness of the images narrated by Jaber Khudhair, of the episodes described that instill in the viewer the sensation of being inside a fairy tale but contemporary, an ideal world where beautiful emotions are linked to the pleasure of being together and sharing.

The smoky atmospheres of the cafes where the artist places his protagonists seem to be wrapped up in the carefree joy of finding each other, together between chatting and coffee, as in the work At the friend’s café 2, where friends get together in the daily ritual of drinking a beverage that, after all, is nothing but a pretext for getting to tell each other and smiling together; the style in this case is closer to the second phase of Cubism, the so-called analytical one, in which the forms merge in the description of the multiplicity of the point of observation without, however, tending to dissolve the details too much.

The image emerges clear also thanks to the chromatic tones chosen and the sense of perspective that is always present in Khudhair. Encounter for drinking coffee also belongs to that series of works that exalt one of the feelings at the basis of everyone’s existence, friendship, that bond, that unites people with whom every action, every event, every gesture becomes pleasant, even the difficulties together seem lighter to face; this is the meaning of the work, that fundamental meeting to relax, to give oneself pleasant moments in which to feel at home because after all it is not the place that creates the atmosphere but the people with whom one chooses to stay.

In this artwork the tones are more earthy, closer to those of Braques, as is the tendency to a greater decomposition perhaps to increase the sense of the multitude of people, of the natural and common desire of the human being to have someone to meet and enjoy leisure time with. In the canvases Love and beautiful melodies and Lover’s meeting Khudhair enters its most poetic form of expression, the one of romantic love capable of instilling colour in every moment of existence, exalting any daily gesture and making pleasant whatever detail is around the lovers: from the musical instrument to play together, to the doves that seem to dance around the lovers for so long to underline the purity of the feeling, from the glasses resting on the tables in apparent observation of the couple’s harmony, till the people in the background who seem to amplify the shared emotion.

The artwork In the city of dreams, on the other hand, seems to tell of an ideal world, the city of dreams, a place where everything is possible, a site of peace and serenity in which to make wishes come true and to be able to leave behind the ugly and unpleasant things narrated through the black signs in the background, those related to war, to the destruction of artistic and cultural heritage. This canvas reveals the artist’s desire to find an idyllic place where he can think of being reborn and build a better world. In the course of his twenty-year career Jaber Khudhair has participated in group exhibitions all over the world – from Lebanon to Venezuela, from Oman to Italy, from Bangladesh to Chile -, has received several international awards and is one of the artists selected for Lisbona Contemporanea 2020, scheduled from April 4 to 10 at the Atelier Natalia Gromicho gallery.