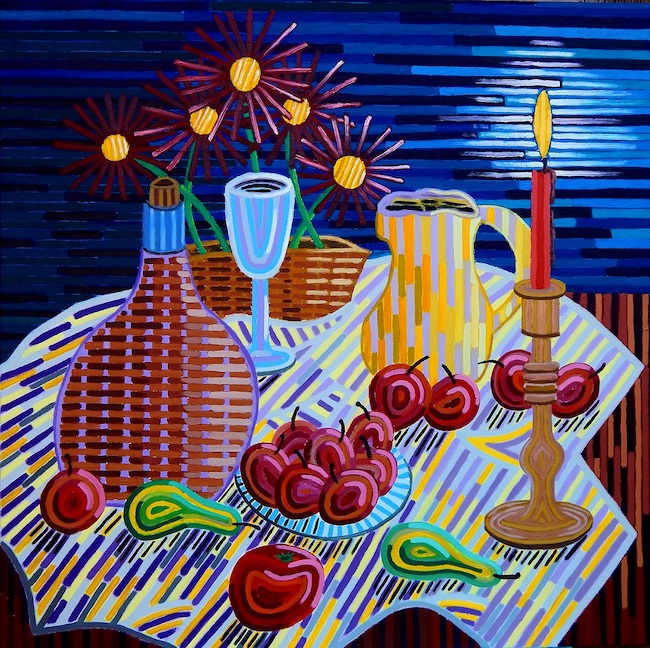 In the contemporary artistic panorama, decidedly oriented towards freedom of expression and autonomy from any rule and preordained scheme, pictorial currents are not able to assume the same characteristics and conceptual dimensions that marked the last century. Nevertheless, some movements are founded and carried on according to the philosophical trace of their creators who follow that path, sometimes even individually, fundamental to express the basic principles of the creative form that distinguishes them. This is the case of today’s protagonist who has given rise to a fascinating artistic current that is waiting to be discovered.

The theme of the decomposition of the image was one of the pivotal points in the history of modern art, a wind of novelty that began at the end of the nineteenth century with Impressionism with its short brushstrokes and the fragmentation of colour through which each shade assumed different expressiveness on the basis of the immediately adjacent one, and with Pointillism, The greatest exponents of which were George Seurat and Paul Signac, who was a more studied and almost scientific extremity of the Impressionist principle of the complementarity of colours which emphasised the futility of mixing colour on the palette to let the fusion of the final result take place directly in the observer’s retina. As the decades progressed, the need to continue along the path of objective study of colours and their decomposition first materialised with Divisionism, in which the dots of previous movements began to stretch and transform into lines of colour which, with their interaction of contiguity, absorbed light and instilled precision in the details of the images. The subsequent evolution of the basic concepts of these innovative movements led to the fragmentation of the images themselves, to infuse movement and eliminate the third dimension, to observe reality from different points of view at the same time that characterized Futurism and immediately after Cubism. From Filippo Tommaso Marinetti to Pablo Picasso, the basic conviction was to be able to explore the visible in a different way from that traditionally observed, to affirm the superiority of artistic expression capable of modifying reality on the basis of a personalisation, of a research different in terms of schemes and academic rules from everything that had been before.

The German artist Michael Kaphengst takes up the theme of the fragmentation of colour but also of reality, dividing it into lines, sometimes straight and well marked, sometimes circular, and sometimes even more hidden, in order to affirm and represent on the canvas his own view of life, an existence already decided by destiny represented by that very linearity through which images, as well as paths, take shape on the canvas.

Linearism, this is the denomination that Kaphengst chooses to give to the pictorial current he founded and around which his entire artistic production revolves, is based on the decisive manifestation, but in some works also much less marked, almost almost hinted at, than the lines that, approaching and approaching, go to compose the final reality; the chosen tonalities are often lively, brilliant, almost surreal perhaps because the artist wants to leave a way out of the schemes, he wants to infuse the feeling that sometimes the trace of our destiny, of the already written path on which we move, can be interrupted, can present a deviation determined by the unexpected or by the will of the individual. And yet the continuity of the following lines seems to suggest a shift from one level to another, which in any case will lead to another line of reality on which we will continue to walk, confirming the ineluctability of man’s destiny.

The works Together and Candelight (the image on article cover) belong to this line, in which the observed reality is filtered, almost superimposed, by the solid and imposing lines that define it and at the same time confuse it, as if the gaze should be undecided whether to follow the description below or the subdivision that seems to overlook it; the colours are flat, without shadows, without depth, to emphasize the importance of the concept that lies beyond a familiar landscape or a composition of objects used daily. But Kaphengst also tells of the circularity of existence, of those courses and recourses that become so familiar that they no longer know how to find their way out despite the desire to do so, and in this case the lines become sinuous, unfolding on the canvas without ever detaching and composing an image whose meaning, whose message, is unreal and approaches a Metaphysical style in which the philosophical intention is linked to the psychological symbolism of the narrated subject.

The artwork Cut is emblematic of this vein Michael Kaphengst‘s expressive line because the lines that fill the background and narrate the circularity, understood as a labyrinthine trap from which it is impossible to escape, of existence are the premise and the echo of the central image in which the axe that falls on the trunk seems to want to be a watershed between what the past was and what has become the present, made of skyscrapers and palaces symbol of progress but also man’s estrangement from his real nature.

Yet there is no way back, suggests Kaphengst, even if we want to destroy the current arid world it is not possible to recover what has been lost, cut and sacrificed in the name of that progress. Finally, more hinted at and hidden are the lines that make up the most Pop, or rather Surrealist-Consumerist, works, in which the artist introduces the concept of the human being intrinsically linked to his tendency to accumulate and purchase consumer products, an inclination from which it is impossible for him to escape because it belongs to his character, to the line of his own destiny, to contemporary existence.

Bottles of Pepsi and Coca Cola, salt, milk, seem to be wrapped and tangled by the suffused coils of the surrounding atmosphere, that trapping sensation of inevitability that captures the observer’s attention and induces him to reflect on his unconscious attitude to conditioning to purchase. During his long career Michael Kaphengst has participated in group exhibitions in Singapore, Barcelona, Miami, Paris, New York, Palermo, Bergamo and, of course, in many cities in Germany, winning many awards and receiving numerous mentions and important premiums.