Home Lifestyle Myths and legends to bind to the epic dimension of the most...
Facebook
WhatsApp
Twitter
Linkedin
Email 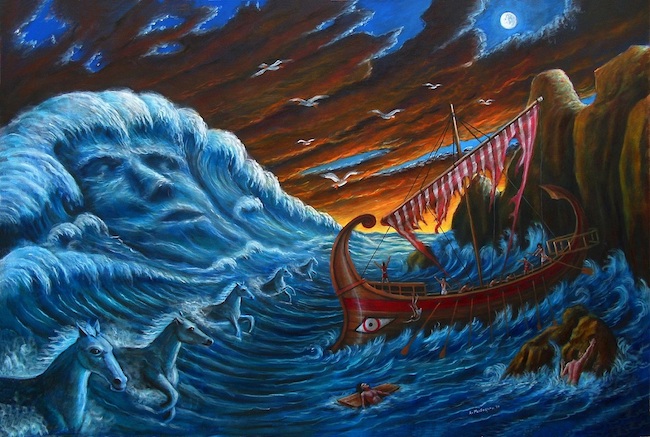 The mythological theme has occupied a central role in classical art precisely because of its ability to fascinate man and suggest existential and moral concepts through simple and immediate images and languages, but capable of making people reflect and give teachings that otherwise would not have been understood. Today’s protagonist starts from classical icons, from ancient myths, to transport the observer towards an abstraction from reality allowing him to immerse himself in a past full of meanings and symbols.

Classicism, especially in sculpture, had set itself the goal of decorating squares and public buildings and therefore to be available for the enjoyment of the people, to enliven their daily life through the beauty of artworks; within this aim it was fundamental for the great artists of that time, to narrate and tell scenes and episodes that could be easily understood by people. Hence the predilection to represent epic and mythological events because that was the way moral and ethical themes were explained, it was through the examples of heroes and the personifications of the gods that people understood the difference between good and evil, between right and wrong, between error and redemption. In Twentieth century, following the rebellion against all Classical, Renaissance and Romantic painting, the Metaphysical movement proposed a reinterpretation of classicism, especially evident in the works of its founder Giorgio De Chirico and the other great exponent Carlo Carrà, in which mythological and legendary statues and elements co-starred in the great squares and open spaces deprived of man’s presence, as if it were necessary to underline the sense of loneliness and disorientation that that era of social, political, existential and technological change was bringing with it. The immediately following current of Surrealism marks a deep rapprochement to inner feelings, bringing the individual back to the centre of the artwork, highlighting dreams, anxieties, nightmares, fears and enriching each canvas with meanings and symbols that are fundamental to decipher its very essence. Alessandro Montaspro in art Almo, Calabrian artist with Roman origins but living for years in Bremen in Germany, combines the classic style for the choice of subjects related to the myth and legend of remote and distant times that still fascinate the curiosity and mind of contemporary man, to that of Surrealism for the attention to every single element of the canvases that becomes fundamental for the final result, as well as for the deeper sense that emerges from his images.

Almo’s artworks, belonging to the Neomannerist movement founded by Antonio D’Acchille and Bruno d’Arcevia, seem to be episodic panels, each one narrating a story linked to the divinity or legend to which the title refers, everyone with a well-defined imprint that fascinates the observer, transporting him to a remote era, abstracting him from the current reality and immersing him in that myth that had been so crucial for the formation of the sense of ethics of polytheistic populations that did not have the opportunity to know or be guided by any other religion.

The canvas Andromeda portrays the beautiful daughter of Cassiopeia, defined by her mother as more beautiful than the Nereids and for this reason punished by Poseidon who binds her to a rocky coast constantly threatened by a monster, in the moment when she is hopelessly preparing to surrender to her destiny but going to be saved by Perseus who will fall in love with her; Almo‘s style is visionary, realistic but at the same time unreal both for the colours chosen for the narration and for the almost fairy-tale connotation with which he represents the sea and the sky, and manages to immerse the observer in the legend.

And again in Titania, Almo tells of the moment just before the meeting between the beautiful Fairy Queen’s eyes and the horrible Bottom, a donkeyheaded man with whom she will fall in love because of a spell cast by her own husband. The artist’s ability to imagine a fantasy world is as evident as his mastery in inducing the observer to plunge in his stories, transforming his approach to painting into a sort of fantasy novel from which to be transported into a dreamy world where everything, although apparently complicated and full of pitfalls, was ultimately simpler because somehow around the corner there was always hidden the possibility of salvation and redemption, for those who deserved it. In the works farthest from the myth, instead, Almo reveals even more his propensity for Surrealism, where every real object makes a modification to become something else, where the image is at the service of a distortion that reveals the artist’s estrangement from all that which belongs to a scheme, but also the need to catalyze the attention of the gaze, represented by the ever-present eye, towards what intrinsic exists beyond what appears and is seen but often not observed.

The artworks Il sarto della manica (The Tailor of the Sleeve) and Neo Met, with its link to the past constituted by objects set aside and the projection towards a future in which everything can be reconstructed or simply recreated, are emblematic of a possibilism and a desire to break a paradigm, a system to discover the infinite implications and options that under a more attentive and freer gaze, it can hide.

The canvas La strana lezione (The Strange Lesson), belonging to Almo‘s last production cycle, projects his style towards Popsurrealism because of the unreality of the narrated scene, full of symbols and dreamlike concepts, linked to a restless unconsious and at the same time fluctuating between a defined past and a fantastic future of which, in spite of the teaching of the old man who seems to have had to bend to technology, one does not perceive the possibility of its resolution. The Rubik’s Cube is the constant of Almo‘s most Surrealist works, a complex enigma but at the same time a popular symbol of an entire era. Throughout his career Almo has participated in many important collective exhibitions and international fairs, including the latest and most important, Art Prague, Art Expo in New York, Budapest ArtExpo and Art Box Project in Miami and his works belong to private collections in various parts of the world.