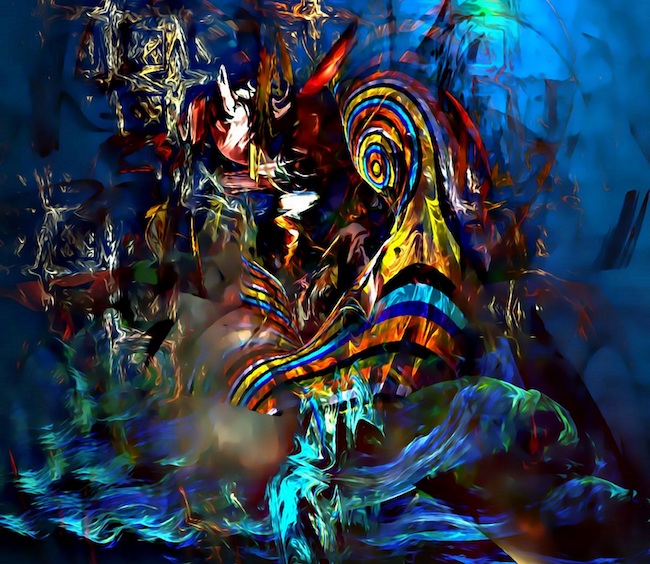 Going to investigate and dig into the deeper meanings of the events or phenomena that occur around us and that are part of a distracted everyday life by virtue of which we often forget to stop and think, is the prerogative of a large group of artists for whom substance takes priority over form and allows them to express a sensitive and attentive interiority to everything that revolves around them. Today’s protagonist has a profound but at the same time liberal approach to his artworks, as if they themselves were a food for thought for the observer.

Contemporary era hides infinite facets on the possible ways of understanding and interpreting the events, more or less great, that follow one another and that unhinge that need for absolute certainties that both in the scientific, technical and medical fields, it is understood that they cannot exist because evolutions often revolutionize previous convictions. This gives rise to a way of approaching reality that is more empathic, more possibilist, more open to interpretation and to the mutability that gives the observer the freedom to interpret events on the basis of his own point of view, his own personal path and his own unique sensitivity. Nadi Adatepe, an artist born in Istanbul but living in Oslo since 1990, experiments on himself the tendency to a transformation, to a search for his natural identity, which leads him, after having felt the need to express himself through various artistic sectors, to find his own creative channel, the one in which he feels more comfortable, Digital Art.

During the mid-1950s two mathematicians and programmers, the American Ben Laposky and the German Manfred Frank, gave life to Computer Art based on the research of Bauhaus constructivism and rationalism and using an oscilloscope through which a mathematical function can project an image. From that moment, a completely new and unprecedented frontier opens up in art, a new frontier which is adopted by some artists and made their only means of expression for the multiplicity of interpretations and for the versatility of the approach from which to give life to images. If on the one hand it is possible to modify and distort an initial photographic shot to create something else, decomposing figures and subjects and transporting them into realities and scenarios that are completely different from the original ones or simply retouching them thanks to the use of electronic brushes and filters, on the other hand the image itself can be generated entirely by computer, through fractals – figures in which a single motif is repeated on increasing or decreasing scales -, giving life in that case to pure Abstractionism, or rather to an Digital Abstract Expressionism. It is exactly the latter method that distinguishes the style of Nadi Adatepe, a skillful narrator of emotions through a language that apparently can have little emotional value but is so malleable that it adapts to the sensitivity of the individual artist in the same way as the brush becomes the link between interiority and canvas of those who choose a more traditional pictorial approach.

Adatepe‘s philosophy starts from the relativist concept that there is no univocal point of view, an absolute truth or a universal interpretation of everything that human beings live and experience and therefore his artistic images, composed from nothing through the repetition of very small forms that together make up a larger and more visible reality, represent his way to highlight how everything that is seen and passively accepted as it appears, can instead have an essence, a different identity if observed from a different point of view.

Going beyond is the key word of Nadi Adatepe‘s artworks, that of providing an opening, an open lock to the door of infinite possibilities, a tendency to leave the observer the freedom to absorb emotionally the sense of the work and to give him his own subjective emotional interpretation, its personal meaning by observing what the artist puts it before, without imposing a trace except through the title that becomes simply a guide and starting point from which to expand an individual inner search. What really counts for Adatepe is to touch the inner buttons, those that often need to be stimulated in order to escape from the safe place in which contemporary man tends to take refuge, to turn the focus on existential questions that he often forgets to observe because he is closed in the generalized vision that does not ask questions but welcomes as correct answers provided by an outsider from the self that instead has the ability to free itself from the networks in which, more or less consciously, gets stuck.

The name of the artworks, Bird nest, Captive, Insurrection, Slavery digital, becomes a cue to deepen the suggested concepts but also a means to induce the observer to get lost in the image and let the energy overwhelm him and involve him to bring out the strongest, most intense, irrational feelings that need to be expressed. This philosophical meaning is at the basis of his artistic creations, which he himself defines as ‘mutual conception’ precisely because of its characteristic of opening the mind by connecting it to the singularity of the observer, who consequently gives his interpretation to the thousand possibilities and options of visible reality. Nadi Adatepe arrived at his current style after several years of experimentation with other styles, and since 2019 he has participated in important group exhibitions in Germany, Belgium and Italy, his works are included in prestigious international publications and has won numerous art prizes.