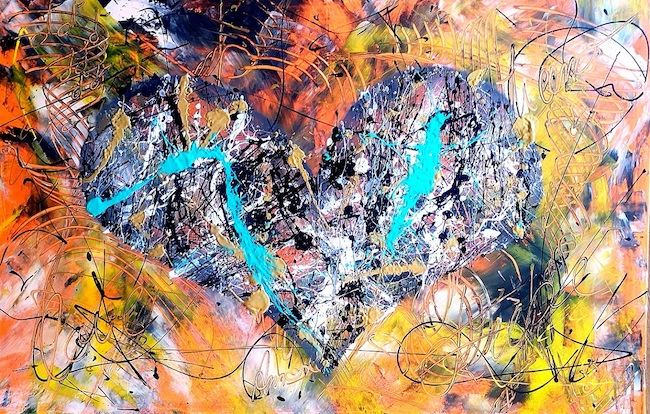 There is a specific moment, in the creative path of each artist, which is the exact point from which energies are released to generate a strong impulse in manifesting emotions, sensations, concepts, which until the preceding second remained latent and unable to overflow. From that moment it becomes essential to continue to generate images that give voice to the interiority; this was the path followed by today’s protagonist after discovering a creative flair that he did not imagine he had and from that point on he was no longer able to stop making art.

Around the middle of the twentieth century was born a pictorial movement that wanted to detach itself clearly from all the previous research aimed at abstracting the concept of art from the sensation linked to the visible, to move away from the figuration that had dominated the artistic panorama of previous centuries but that, in some way, was withdrawing to artworks the intensity of emotion to affirm the predominance of pure form. Through an almost scientific analysis linked to geometrical images and primary colours, movements such as Geometric Abstraction, Suprematism, or even the monochrome dematerialization of the artwork through which bringing together the scientific themes of movement, sound and space that characterized Spatialism, had linked the creative act to a logical and rational approach that granted nothing to the most inner, instinctive part of the artist himself. Jackson Pollock decided to strongly oppose the renunciation of the irrational and that emotion that he considered an essential part of the work, giving life to Abstract Expressionism to which all the group of creatives who could not feel close to some of the parallel artistic currents adhered. The random use of colours through Action Painting but also with more controlled and reflective methods that always left the emotional imprint of the author on the canvas, and the choice of shades functional to the inner world or the instant that one wanted to immortalize, were the main characteristics of the movement, as well as the stylistic freedom witnessed by the heterogeneity of the artists who adhered to it. So the strength of colours, already theorized by the previous Expressionism, together with the detachment from the representation of reality in order to let sense, essence, emotion and instinct predominate, were able to give a new meaning to Abstractionism which seemed to dominate the artistic panorama of the mid-twentieth century. The German Stefan Meßlmeier chosed Abstract Expressionism as soon as he felt an irresistible attitude towards art, in a phase of his life when everything seemed irremediably still, stuck inside a reality that did not feel it belonged to him and it was precisely because of that tendency towards the creative impulse that from that phase he came out revealing his inner energy. 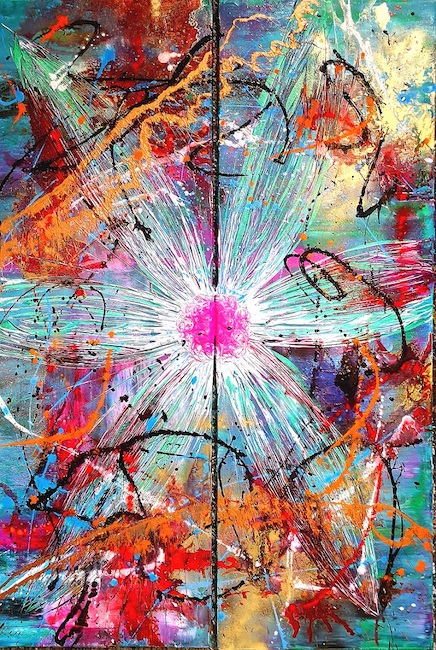 His canvases are an overwhelming and lively universe in which Feßlmeier impresses all the positivity and sense of joy for having recovered that part of himself that seemed to have lost, and a renewed ability to look at the world in strong, lively, forceful colours to the point of becoming individual voices of a chorus of emotions able to escape from the work to touch the most instinctive strings of the observer. 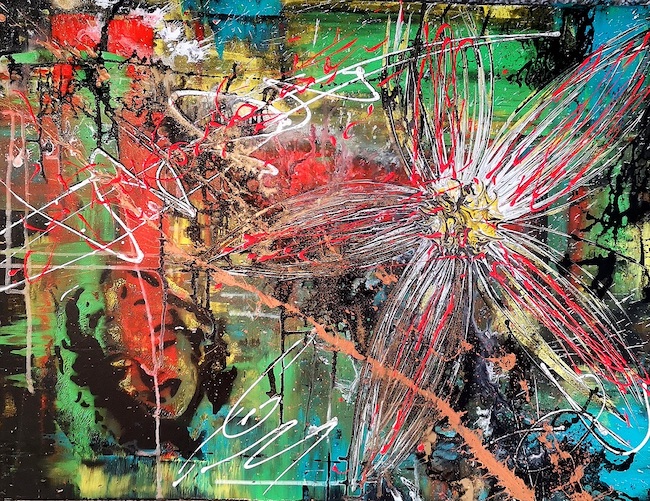 He uses the technique of the Action Paintig on which, however, intervenes through the grattage to literally engrave on the colors the image he wants to bring out, the stroke he wants to make prevail, the detail to be highlighted in the existential chaos of those impetuous colors that reveal a positive trend, an ability to glimpse the beautiful through the vortex of rational impulses that often envelop everyday life. 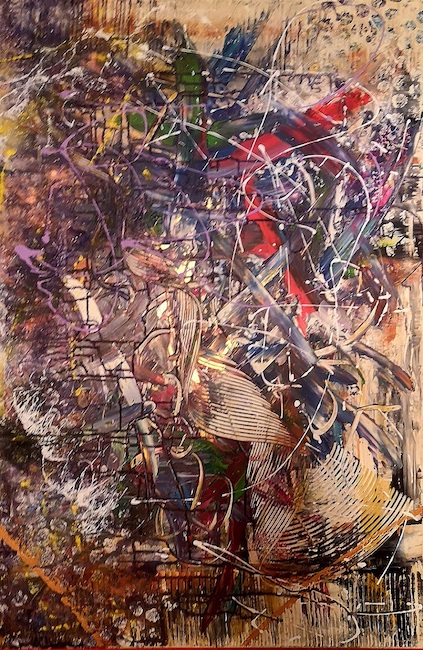 It seems to be an exhortation to go beyond what appears that of Stefan Feßlmeier, an invitation to contemporary man to stop a little more often to reflect and appreciate what he has, everything that is part of that distracted existence, which he all too often finds himself leading, which distances him from the real substance of what surrounds him. 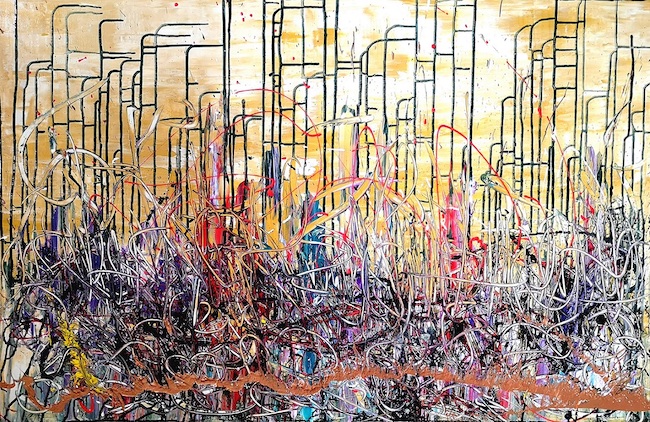 Hence the need to release those energies that are not normally listened, that vital flow that is generated and that needs to express itself externally, to communicate and manifest a point of view of the individual who can also find connections and synapses with the other, interpreted as different from the protagonist of the sensation, who finds empathy precisely because of the similar and close feeling or, on the contrary, can open to a different point of view and interpretation. 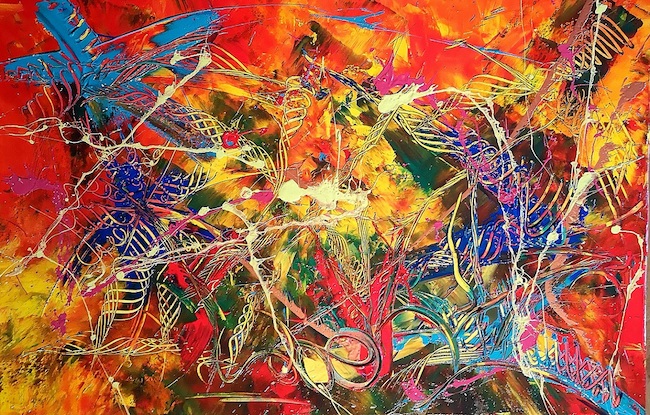 The choice not to give titles to the artworks is also somehow an invitation from Stefan Meßlmeier to approach his canvases without preconceived notions of the mind, simply by feeling the colours, lines and whispered figures that emerge almost in transparency, without invading, to let go to an emotional universe that needs to be free from every rule and every limit to express its deepest essence, and this is true for those who communicate but also for those who receive the message of the pictorial act. 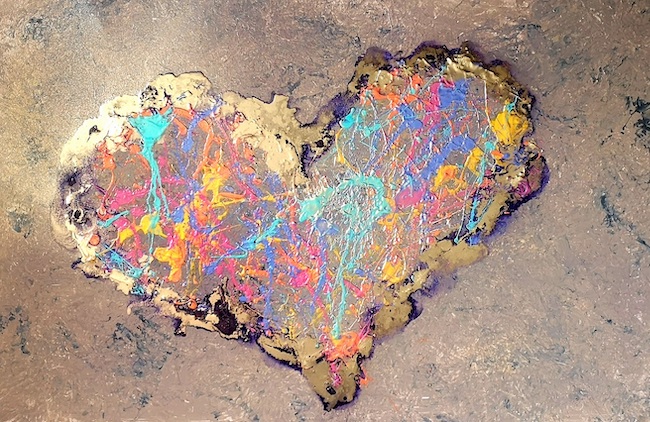 Meßlmeier‘s positive approach alternates with another range of emotions, those of doubt, uncertainty, the pain of wounds, which however are functional to an overcoming, to the propulsive phase of healing and rebirth towards the colour and beauty of a path that restructures and finds new lymph exactly by virtue of the dark period that preceded it.

In his career, which began late in 2017 but never interrupted again to follow the creative flow that now belongs to his essence, he participated in various group exhibitions; with the proceeds from the sale of his works he supports the German Association for Depression Assistance, the campaign for the donation of bone marrow and the German Foundation for Paediatric Cancer.