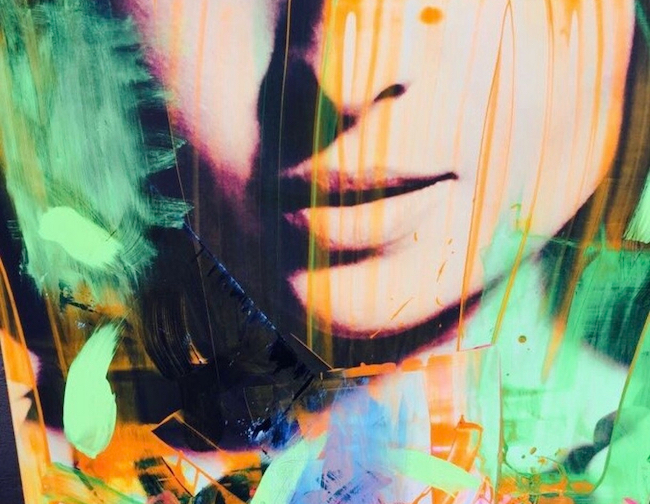 Bringing to light and making immortal the cinema icons of the past was one of the hallmarks of that pictorial movement that in the mid-1950s literally overturned and revolutionized the approach to art. Today’s protagonist takes up the basic intention of Pop Art but gives it a personal touch linked to the modification of the real image thanks to which photography comes to life and changes on the basis of the artist’s emotions.

One of the most revolutionary movements of the twentieth century was founded and theorized in its guidelines, by that innovative genius and forerunner of the times that bore the name of Andy Warhol, who had the unprecedented intuition to democratize art both through the language he chosed, reproducing images of advertising for consumer products easily available and therefore visible in supermarkets, but also that of Hollywood movie stars or great personalities of the time, and also through the introduction of serigraphy, the serial reproduction of a limited number of pieces to which it would have been possible to apply a lower price than an original work, thus allowing a more public vessel to buy and have at home the beauty of art. The fascination that the iconic and representative faces of the new mass culture, the cinematographic one but also those of the society of the time, exerted on the fans of this new style marked a planetary success to the point of making Andy Warhol one of the most esteemed artists while still alive. Parallel to such a figurative and recognizable movement, the most instinctive, conceptual and intellectual movement of Abstract Expressionism took hold, in which the image had to succumb to the importance and urgency of emotions, strong, fast, rapid and hurry, which had to be the absolute protagonists of the canvases in which one did not have to look for a recognizable foothold from the gaze, but simply let oneself be carried away and overwhelmed by the intensity that the colours narrated. Both pictorial currents left a deep mark in the history of contemporary art, opening the way to the need for expressive freedom, released from the chains and academic rules in force until the previous century, and the need to reach the public in a direct, spontaneous way, with the simplicity of images in the case of Pop Art and with the intensity of emotions in Abstract Expressionism. Daniela Kennedy, an Austrian artist who has always been in love with art to the point of having chosen it as her profession, over time transforms her style closer to the Abstract Expressionism of Gehrard Richter, an established contemporary artist who was a source of inspiration for Daniela, to create a synergy, a fascinating synthesis between her Pop soul and her other expressionist side.

The last production cycle sees her engaged in the reproduction on canvas of images of the European divas of the Fifties, who became stars of the Old Continent, on which she then intervenes to infuse those black and white images with her emotionality, the feelings that those great women inspire her.

The chromatic choice is linked to Expressionism because the tones are not related to objective reality but rather linked to the inner strings that vibrate in Kennedy when she stands in front of the big photographic press and decides to make the voice of the characters she makes protagonists heard.

In Sophia Loren chooses to enrich the very famous face of Italian cinema with sunny tones, such as orange, the symbol of Campania’s liveliness and sunshine, green to describe the freshness of the image that portrays her when she was still young and symbol of Mediterranean beauty, and fuchsia through which Kennedy tells Sophia’s bursting and unforgettable femininity.

The tones used for the work dedicated to Maria Callas, sacred monster of the song, extraordinary voice and symbol of class and elegance, are instead lively, fragmented but harmonious with each other, as if Daniela Kennedy wanted to transform colors into musical notes to accompany and emphasize the immortality of one of the greatest stars of world music.

As much alive the image of Callas as veiled by the gloom of a life broken too soon the canvas dedicated to Romy Schneider, in which the dark tones are spread through vertical lines that want to somehow remember her beauty but also the sadness of having lost an existence that could have been wonderful but instead had an early and sad epilogue; those vertical lines seem to represent the cage in which her future was trapped by a strange destiny that somehow made her immortal because of the short trace she left in European cinema. But Daniela Kennedy never breaks away from her natural tendency towards Abstract Expressionism, through which she lets flow freely feelings that are linked to her interiority, to her emotions, to the dimension she lives daily and from which she draws inspiration to create her artworks.

In the canvas My world she reveals a positive and smiling look towards an existence that she has chosen and that satisfies her, preferring a powdery, nuanced atmosphere, as if after all her tendency was to observe things through the mediation of balance, serenity, softness of what happens and that accompanies an extraordinary everyday life even in its ordinariness.

And again in Geburt (Birth) tells a primordial reality in grayscale, perhaps because in the unconsciousness of the first steps in life everything still has to be discovered, the colors of joy, surprise, love, fears, uncertainties, are still unconscious and therefore the tones of black and white represent the basis from which will develop, slowly, the awareness of the possibilities that open before each of us. It is a veiled reality, or rather stratified, that of Kennedy, in which everything is superimposed on the next moment or phase to compose a picture in continuous evolution, just as the personality of each one of us is in continuous modification on the basis of subsequent events. Daniela Kennedy in the course of her career has participated in many group exhibitions both in Austria and in Europe and has been selected to participate in the international exhibition Sogno di fine estate scheduled at the Spazioporpora gallery in Milan.