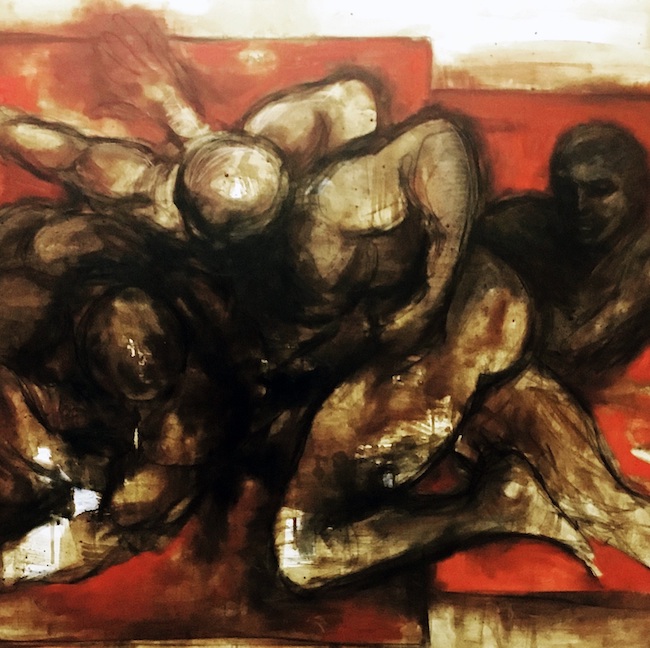 Tackling the complex themes of sociality in an era like the present one is a natural inclination of many artists who need to descend into the depths of precariousness, ambiguity and loss of values that human beings inevitably go through. The artist I will tell you about today tells those instabilities by choosing a language that is sometimes more manifest, sometimes more hermetic, but always of great expressive intensity.

Modern Mexican art is strongly linked to the muralist approach of great names of the past such as Diego Rivera, José Clemente Orozco and David Alfaro Siqueiros, founders of the Mexican Mural Renaissance, for whom the imperative was to communicate social, political and existential themes to the people according to the approach that each of these three giants of painting chose as a expressive channel. More Social Realist Diego Rivera, with his raw and desecrating language towards delicate themes such as religious ones or representing the revolutions of a time when Mexico had to rebel against the pre-existing power, as well as equally politically oriented in each of his great works was David Alfaro Siqueiros, in turn oriented to narrate scenes of the revolution as if to encourage people to resist and oppose to power. The one who was more oriented to consider man in his individuality, highlighting his inner sufferings in a less realistic way and much more inclined to Symbolism, was José Clemente Orozco, softer towards political and social representation but decidedly more inclined to question how high was the tribute in terms of human lives that the revolts, so much celebrated by the two colleagues, left behind him. Rafael Torres Lugo, Mexican artist from Torreòn, draws inspiration from Orozco for the need to explore human pain, in Lugo‘s case more existential than objective, bringing to light an evil of living that characterizes modern man perpetually poised between showing his strength outside and having to deal with the weaknesses and fragilities of an identity in perennial search for itself and a balance that tends to escape.

In his works, of clear Expressionist imprint, the protagonists are sometimes marked by the furrows of life, of an interiority that comes out in spite of appearance and that cannot hide the voice of that transparent essence, evident to those who have the ability to observe; Gabrielle artwork shows exactly this kind of strength, that of an intimate that exhibits itself, almost with pride, with all its scars in front of the observer’s gaze.

The restlessness of living, with all its complications and consequences, with the disorienting and very often competitive interactions and for this reason generating clashes, whether physical or ideological does not matter, is the protagonist of two of the most intense paintings by Rafael Torres Lugo, El año del comet, the image on the cover article, and La celebracion del chaman (Shaman’s celebration), in which the almost tangled bodies tell of a natural, almost primordial antagonism, which induces the human being to overwhelm rather than to support and sympathize, as if existence was all a matter of who wins and who loses. The weakness and fragility concealed behind the apparent strength and desire for prevarication are transformed into an exhortation by the artist to reflect on how much inner energies are used for needless struggles that ultimately lead to nothing but a withdrawal of individuals who end up closing in on themselves. Thus, in the following works, heavenly icons begin to appear, as if Torres Lugo felt the need to find a way out of the dynamics that trap the human being in his very essence and tend towards higher entities that can appear as an example, a salvation, an anchor to cling to when all that is daily and earthly no longer leaves any refuge, any remedy, to human weaknesses.

Miguel (Michael) artwork describes the greatest among the archangels, the one to whom the task of announcing the final judgement is attributed, but also the courageous one who is able to stand beside man to defeat dragons, identifiable with his own ghosts and inner conflicts; the angel therefore takes on the meaning of the way out, of the possibility of rising from an unconscious and primitive identity to reach a higher step of his own spirituality, leaving behind selfishness, arrivism and prevarication towards his neighbour.

As in Ensayo de la maquina para volar (Test of flying machine), where the atavistic attempt of the human being to fly, understood in the sense of yearning for the improbable, is an allegory of the desire to ascend towards a higher knowledge that must be reached and that, immediately afterwards will be surpassed by a new desire to go beyond the previous objective. The latest works, protagonists of an important solo exhibition scheduled for April 2020 at the Universidad Autònoma de Coahuila in Torreón, Mexico, are a further step by Rafael Torres Lugo towards the search for earthly abstraction, identifying the female figure as an icon of a higher sensitivity that allows her to intuit and become a guide and a headlight to overcome obstacles and adversities.

In this specific production Torres Lugo abandons colour and uses mainly charcoal and acrylic, choosing black and white to describe the pagan symbols that become hope to overcome contemporary adversities.

The work Hathor cernunnus, tells of the Mother Goddess, queen of heaven and generator of life, whose horns express the supernatural power of the soul and of the vital principle, which symbolizes an invitation to rebirth from the temporary difficulties we are facing; and again Strong Kodama, the Japanese spirit of trees very similar to the dryads, which seems to hope for a return and rapprochement towards a nature too often mistreated and underestimated. Rafael Torres Lugo has to his credit more than forty solo and group exhibitions in Mexico and the United States and the works are part of private collections in many countries around the world.