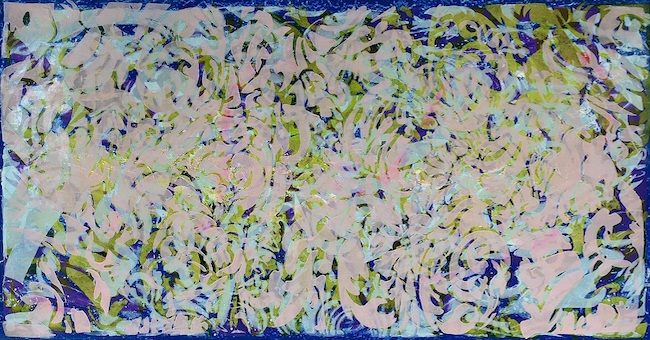 Very often, painting, the artist’s approach to the canvas, is linked to a basic thought from which to derive the style most suited to his expressive chords, in some cases more meditated and reasoned while others are more impulsive and impetuous in order to tune in to the sensations experienced, perceived and internalised to the point of no longer being able to hold them back.

The artistic movements that have taken place throughout the twentieth century have manifested a greater rationality and logic, sometimes even mathematical and scientific, or the need for the total predominance of pure instinct, of the immediacy of the creative act in its primordial nature, without any filter from the mind or completed thought. Achao, on the other hand, manages to skilfully blend a soft, reflective and meditative sensitivity with a decidedly more instinctive pictorial act, almost as if in him heart and soul were merging to speak a single language, that of emotion, that of colour, that of the sensations with which his canvases inevitably harmonise. His style, which was initially more expressionist, gradually shifted more and more towards Abstract Expressionism, although his tendency to freeze emotions, creating stencils through which giving them form and visual consistency, also brought him closer to a tribal muralism in which the non-figurative sign is the full externalization of everything that moves, rotates and rolls up in the artist’s innermost being to be narrated. The series of artworks entitled Impermanence aligns with a new phase in Achao‘s journey over the last year, a journey within himself that has led him to carry out a work of introspection, of awareness of contingent reality and of the need to deal with disorientation and pain in order to then find the light of hope, of a renewed certainty that everything would be destined to evolve and bring positive change and transformation. The most recent period was almost a conscious rebirth, a desire to approach and confront a profound spirituality that the artist felt the need to allow to emerge, but not before allowing himself to be enveloped by it, immersed in those sensations of connection with everything that surrounds him, in order to be able to place himself in a position of greater listening. Sensitivity often leads one to consider and perceive the outside world with great openness, forgetting oneself and one’s own inner needs, so Achao felt a strong necessity to question himself and immerse in an intimate universe that reassured him, allowed him to understand that everything he required to be reborn and find the peace he needed was already inside him.

Buddhism was the basis and inspiration for this new cycle of artworks in which emerges the sense of peace, calm and peacefulness felt by the artist when he let himself go to inspiration while listening to the mantra Om Tare Tuttare Ture Swaha; The subject that inspired him for his canvases, in which the sphere is the dominant element, is the bas-relief on the Dhamek monument, an enormous stupa located in Sarnath, in the state of Uttar Pradesh in India, known as the place where Buddha began his teaching to his five disciples immediately after he was enlightened, revealing to them the path to nirvana. In Buddhist philosophy, the circularity of existence, since everything is divided into more or less long life cycles, just as each beginning represents the end of a cycle that has ended, is the essence of thought and experience that the individual carries out, often unaware that he can choose to rise towards a higher form of knowledge of himself; but the spherical shape is also important because it represents the six worlds in which individuals, based on their choices and their actions, can end up unconsciously choosing the price to pay or the prize to receive from existence.

This is why the sphere becomes the essential element of Achao‘s artworks, that circularity which on the one hand puts everything in its place by closing a vital circle generated by cause and effect, by actions and reactions that what happens, what the individual goes through, highlights and underlines, while on the other hand in some way encloses and protects man inside a shell in which to store the most positive sensations, the most fragile emotions, the least revealing weaknesses.

Achao‘s works are reassuring, the tones he chooses are soft, delicate, and yet if one looks more closely at the interior, at the drawings he places in the nucleus, there seems to be a tangle of sensations, a crowding of ideas and feelings that cannot help but fluctuate, revealing themselves to the observer; in some cases they appear more angular, more geometric, perhaps corresponding to those paths of the mind in which rationality wishes to prevail despite the fact that, as the artist seems to suggest, it is inevitable sooner or later to let emotion prevail. In this case the sphere becomes a casing within which to enclose oneself, in which to try to hold back the rationality that illusorily reassures while in reality it often constitutes a prison, a cage. Even the colours are colder, seeming to accord with the rigour that tends to overwhelm the softness of the emotions, while the backgrounds are in line with the sense expressed by the angular nucleus, and so the chromatic range chosen is that of blues or greens.

In the artworks in which, on the contrary, the drawings are more sinuous and undulating, therefore akin to a rediscovered possibilism, to an ascent towards an awareness of the infinite options that life offers and in which, therefore, the sphere is no longer considered as a shell but as a collector of experiences and sensations that become precious baggage for the individual inclined towards evolution, the tones become warmer, taking on more intense but enveloping shades, linked to those interior chords that vibrate thanks to that existential openness. Just as the backgrounds light up and turn towards yellow or orange. In any case, Achao‘s canvases seem to pulsate, amplifying the rhythm of the mantra within which the artist has lost himself, thus coming into contact with his deepest self and returning it to the observer, who feels attracted and drawn to the stylised drawings as much as he is enveloped by the superimposition of images and colours that transport him in the sensation of having to listen to the musicality that emerges from the canvases themselves.

The path of spiritual rebirth is a desirable one for each individual, especially at a time in history when everything seems to have lost the sense it had before and therefore what remains is an individuality necessary to overcome difficulties, the awareness of having within oneself the strength and energy to get up and build a new tomorrow.

This is what emerges from Achao‘s new production cycle, which holds firm to the creative line in which his sensitivity finds its greatest expression, both in the delicate, overlapping lines of his Abstract Expressionism, as if he wanted to express the concept that reality is too complex to be seen clearly, and in the soft, delicate range of colours by virtue of which the artist seems to suggest that in the end even everything that is complex can have a positive key that can be interpreted through the filter of sensitivity.