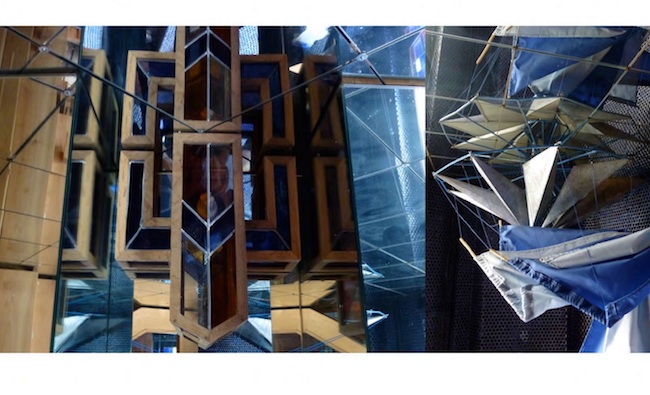 The world of architecture, conceptually and traditionally understood as a rigorous discipline and linked to specific calculations, sometimes seems to leave few space to creative freedom to form something linked to the imaginary, the dream, the realization of a vision that then comes to life and becomes an integral part of the environments in which it is located. Yet there are creative people who manage to conceive something new and surprising, like the protagonist of today’s review.

Georg Maria Güntesperger‘s training is based on a strong inclination towards art meant in the widest possible sense, he studies musicology, he is passionate about theatre and stage lights, in parallel with the study of more rigorous subjects such as physics and mathematics; his dual soul is manifested even later when he chooses to pursue a career as an architect but also as a composer and instrumentalist, laying the foundations for what will be, later, the realization, the synthesis, of this dualism and that will result in a creative uniqueness of absolute charm. He studied and was inspired by the most visionary and revolutionary architects of the architectural Modernism as Antoni Gaudì and Le Corbusier, up to his contemporaries Frank Gehry and Zaha Hadid, innovators, brave, able to break schemes and stylistic balances to forge and bend buildings according to their expressive impetus.

Güntesperger, while remaining tied to the geometry and linearity of the surfaces he creates, succeeds in giving the sensation of mobility, of perpetual modification of the spaces on which he works, of connection with the dream that he expresses by inserting contrasting details, apparently fragmented areas, playing with the colours of the materials for lines that become complement and completion of the context. The glass segments come out surprisingly at unexpected points, as in the case of the wardrobe with a Ruhberg glass lamp, and are triggered in the cubic structure of the wooden shelves, breaking their regularity with a shape contrary to the base, vertical upwards rather than square and horizontal, expanding the feeling of height and illuminating the uniformity to give it new life.

In the case of the Aladin’s Boutique in St. Gallen, on the other hand, modularity becomes the absolute protagonist of an idea of movement, where the glass surfaces seem to follow and somehow flow together with the lines of the flooring, which in turn reflects the schemes of the counter and side shelves in a continuum that envelops and welcomes the visitor.

And again, the Cascade outside the Boutique gives movement through the play of light and shadow of the concrete cubes, as if they themselves were moving softly, under the gaze of the people accompanying their descent to the entrance of the store.

The alternation of lines and contrasting colours is also evident in the windows, where fragments are inlaid with radiant lines that extend the view outwards, as in Pythagora’s sunset, in which the half glass rose window seems to frame the panorama below, yet it is co-starring precisely because of the alternation of strong, clear colours that seem to become the focal point that makes the gaze flow towards the natural landscape image of Lago Maggiore. The upward trend, vertical lines that somehow represent the yearning for a higher self, more progressive and tendency toward personal growth, are a distinctive feature of Georg Maria Güntensperger, who plays with geometries as if they were clay and inspiration for his irresistibly creative mind, and which he applies in various places, outside and inside, and in different situations of everyday life.

His success as an architect, but also the chance that allowed him to freely express his visionary nature, came after the meeting with the famous writer C.F.Frey, stage name Akron, who entrusted him with the realization of interiors and furnishings of what he called his little magic castle in Ruhbergstrasse in St. Gallen; a castle that was the protagonist, thanks to the contribution of Güntensperger who made him unique, of many photo shoots and television reports. In the building’s attic bedroom, for example, the wooden inlays push and guide the eye upwards and then discover a lace ceiling that leaves you amazed and at the same time fashinated at how masterfully the entire structure is design to harmonize spaces. He was also responsible for the creation of the tomb after Akron’s death, a glass construction on which the light refracts, which seems to keep alive the vital flame of a character, an artist, who has been able to leave a mark for future generations through his writing. Swiss from St. Gallen, Georg Maria Güntesperger begins his career in the Seventies, when he was commissioned to restore an old Ticino house located in the Sciaga Mountains, in Italian Switzerland, and that was the starting point of a creative manifestation in constant movement and that has moved across other artistic fields: from the direction of lights in the theater, to the production of theater and dance performances, without ever abandoning the love for architecture, its expressive form more capable of liberating and recounting his visionary and dreamy nature.