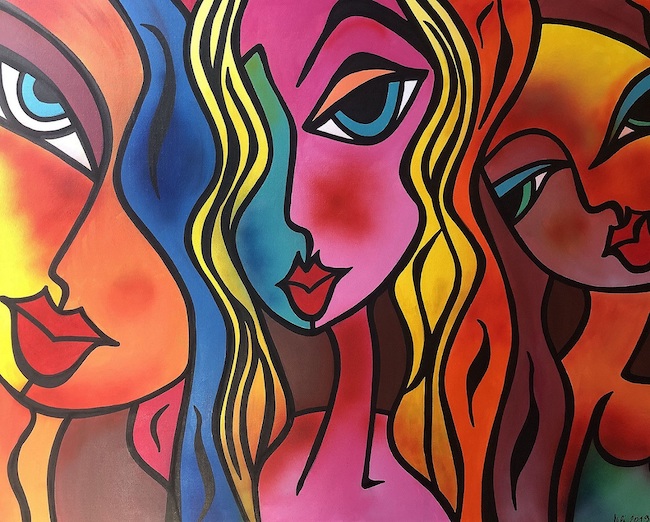 The tendency of many artists to internalize emotions and sensations by showing them on the canvas in a hermetic way, sometimes very impetuous, and sometimes almost whispered through figuration or non-figuration, opposes the approach of another considerable group of creatives who need to dive into the positive and lively side of existence. The eclectic artist I am going to tell you about today not only creates vital works that narrate his optimistic and colourful look at the world, but also starts a production of fashion accessories in which his most iconic images are the protagonists.

Starting from the mid-1950s a new popular culture was established in the society of the time, the one spread by television, advertising, cinema and new means of reproducing images such as comics. That important revolution of the community that gradually became more and more global could not be ignored by art, which somehow felt the need to reconvert and find a suitable communication channel to approach a wider public than the elite who until recently had the privilege of enjoying works of art. It was with this basic mission, that is, to reach people as much as the new means of communication, that two fundamental artistic movements were founded, Pop Art and Street Art, which radically changed the way of understanding artistic expression. Bright colours, clear and direct messages that could be understood by anyone observing a canvas and the sensation of feeling a familiar painting to the point of being in its language, were the characteristics of both artistic currents which, beyond the glossy aspect, however, concealed a much wider and deeper social message, without making it heavy precisely because of the apparent lightness through which it was expressed. In the present century the artistic movements have undergone a new evolution, a change that comes from and is generated by the fusion of ideas and pictorial styles that, while maintaining the original guidelines, welcome within them variations and customizations of individual artists. Two of the greatest contemporary exponents of NeoPop art find themselves at the antipodes of the world, while presenting the same vitality and colourful approach to life and the contemporary world, of which they leave inevitable evidence by representing its symbols: the Japanese Takashi Murakami and the Brazilian Romero Britto. Small flowers that fill the base of the canvas, Manga and light colours distinguish Murakami as much as innocence and the typically Carioca desire to live characterise Britto, whose works skilfully mix elements typical of Pop Art, Street Art but also the decomposition and geometrization of images belonging to Cubism. The style of the German artist Uli Fischer is inspired by Romero Britto in his strokes, tones and synergy between the three styles, while elaborating unique characteristics that make him absolutely recognizable and distinguishable from the Brazilian master. He lets one and sometimes the other Fischer‘s pictorial movement prevail, based on the sensation he wishes to describe and also on the subjects chosen as protagonists, so he embraces Neocubism more decisively when he narrates the range of emotions, often confused and mixed, that envelop the mind and interiority.

The work Curious Vol. II perfectly represents the sense of disorientation that sometimes envelops before something inexplicable, incomprehensible at first glance, able to take the mind to the point of wanting to discover the mystery, the flap that escapes; hence the need to manifest that feeling through the decomposition of the subject who seems to be immersed in thoughts, questions and different options to which he is unable to give a definite order.

In the same way in the Straight and Wrong canvas, Uli Fischer once again lets doubt emerge, the phase of disorientation that he skilfully recounts through that fragmentation of reality perfectly capable of involving the observer in the same dimension of bewilderment that he himself perceives and feels in front of a crossroads, an indecision, a hesitancy; yet the tones chosen by the artist are always lively, playful, as if after all even those impressions are part of the beauty of living, of the fascination of existing and choosing, regardless of what the decision is and where it leads. He has a softer approach, still with Cubist traits but much more pop, when instead he makes women the protagonists of his works, with those aesthetically imperfect faces, almost as if his style went back to the dawn of Cubism but with intense, decisive colours, which can directly bewitch the eye, in the manner of multicoloured images that so distinguished the more glamorous, more iconic, more ‘80s Pop Art, as in the artworks Threetimes a lady, in article cover, and Blue ladies.

Definitely more Graffiti are the works Funny Twisted and Free balance II, where the vitality and positivity of Uli Fischer is even more clear and decisive, where colours prevail over the subjects described because after all, in solitude or in the multitude what really makes the difference is one’s ability to face and interpret the events and episodes of everyday life. Not only an artist but also an entrepreneur, Fischer understands the potential and attraction of his particular pictorial style and decides to open his own line of fashion accessories on which he prints the most significant images, or those that best suit the surfaces of the products they have to adorn.

Handmade shoes with heels or sports shoes, women’s bags, rigid trolleys, any object that can be coloured and livened up by his works Uli Fischer creates it and the result fascinates and conquers the consumer because deep down in everyday life there is a need for a smiling and cheerful look, to face life with an extra gear, letting go to a smile and a less serious, more cheerful, less austere point of observation. An artist, an all-round creative who has managed to combine a pictorial impulse with a more commercial approach in order to give the public at large the chance to purchase a work of art, simply by wearing it, thus confirming his Pop Art philosophy.