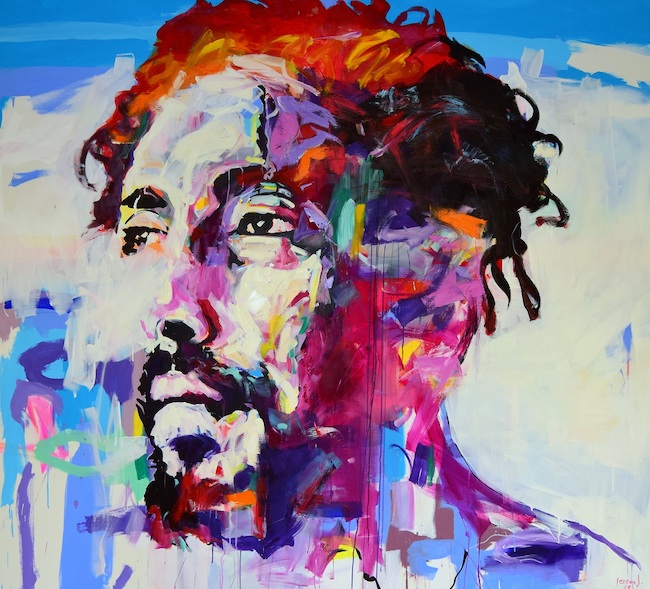 Portrait is an expressive style with which artists of all ages have measured themselves, very frequently under request of the protagonists of the artworks themselves, who wanted to leave an indelible mark over time by immortalizing and handing over their image to posterity. In other cases, however, it was the painters who chosed the subjects, leaving to history of art unforgettable and fascinating paintings. Today’s protagonist re-actualizes portrait by transforming it into representation of often imaginary characters whose emotions and depths make them incredibly real.

In all the historical periods preceding the twentieth century there was no other way to have images of oneself and one’s loved ones than through a painting, which only the wealthy classes could afford, because those advances in technology that would lead to the camera had not yet been made, object that will have maked access to a visual memory more easily obtained by an great number of people. Before this technological change, the reproduction of faces of noblemen and aristocrats was entrusted to the skilled hands of the masters of painting, from the Flemish Jan Van Eyck and Albercht Dürer to the supreme masters of Italian painting such as Raffaello, Leonardo da Vinci, Tiziano, From Rembrandt‘s Baroque to Francisco Goya‘s Romanticism, passing through the unforgettable paintings of the exponents of Realism and ending with the famous names of Impressionism such as Manet, Monet, Degas, Renoir, who consigned to history figures of the French nobility of the late nineteenth century, friends and tycoons thanks to whom the same painters entered the prestigious salons of Paris at that time. In Expressionism, on the other hand, portraits were perceived as a necessary means of expressing the fears, anxieties and discomforts of a period between the two world wars that left little room for the aesthetic research and frivolousness of the years just before. In contemporary world some gloomy reflections and existential anxieties have been overcome, emotions have begun to be accepted as part of an essence and for this reason they should not frighten, on the contrary knowing how to live with them contributes to make man more complete, incredibly complex but althought aware of his own strength and weakness. Jerson Jimenez, a very talented artist from Dominican Republic but naturalized Austrian for many years, appropriates and gives the public a fascinating interpretation of Neo Expressionism, in which the portrait becomes the focus of his artistic production as well as a means to narrate not only the multifaceted differences between individuals but also the personal and unique sensations and essences of which the colors become fundamental keys to let out the notes of the soul.

In most of the works, the characters depicted spring from the artist’s fantasy and yet the feeling one has when looking at them is that they have something common, something already seen, as if the observer believes, who knows where and who knows when, that he has met them; this is because in front of the sensations, the depths, the emotions, one cannot help but recognize oneself, to find oneself. From the portraits comes out the subtle thought of Jerson Jimenez according to which in front of feeling there is no diversity, no distance but sharing, understanding, sense of belonging to an inner world that unites and breaks down all barriers.

He uses those imaginary faces to describe Jerson’s existential concepts, as in the work La Esperanza (Hope) in which the liveliness of the tones chosen to define the protagonist’s face are linked to the light of that feeling necessary to overcome obstacles, get up after a fall and start chasing a dream again; just as in Amistad (Friendship) the reassuring gaze of man arouses in the observer an instinctive feeling of trust, of a serene loyal and shared approach that only in true friendship one can meet.

In Bondad’s (Goodness) portrait the artist uses delicate, pastel tones, almost as if to exalt the woman’s face, which he identifies with a quality, goodness, that modern man often tends to lose, forgetting behind arrivisms and competitiveness that make him forget to look around and reach out his hand; the choice of a woman’s face is probably due to the female ability to be a generator of life, of unconditional maternal love, eternal and able to break down all barriers, to forgive, to sacrifice herself for another human being.

The details he highlights in each of his portraits make those faces unique, unmistakable, intense, precisely because what Jerson wants to come out are the essences, those true colors that characterize each person’s interiority and that manage to make it unique precisely because of those facets, those infinite combinations capable of generating a delineated and changing personality; the sensation is that of observing others through the lens of a kaleidoscope, from which one can see the different joints that make up its exclusive and original peculiarities.

Works such as Caribeño (Carribean man), the cover image, Un Amigo (A friend), La Joven (Young girl), let out the feelings of the protagonists as if they themselves had told them silently to the artist, while in reality it is Jerson’s empathic ability to create well defined personalities starting from a single emotion. Another unmistakable characteristic of this incredible artist’s canvases is the large format that contributes to generate that magnetism, that wonder from which the observer can only feel completely involved.

The imaginary portraits are sometimes accompanied by tributes to well-known personalities, such as the one of Jon Bon Jovi, of which Jerson Jimenez tends to emphasize the human expression, not that of celebrity but that of the simplicity of emotions that do not spare or distance themselves from anyone, no matter how many or what results they have achieved in life. Jerson’s artistic career is very long, he held his first exhibition back in 1987 and since then his rise has never stopped: he has had numerous solo and group exhibitions in the Dominican Republic, Slovakia, the United States and Austria in which he has received much acclaim from the public and critics.