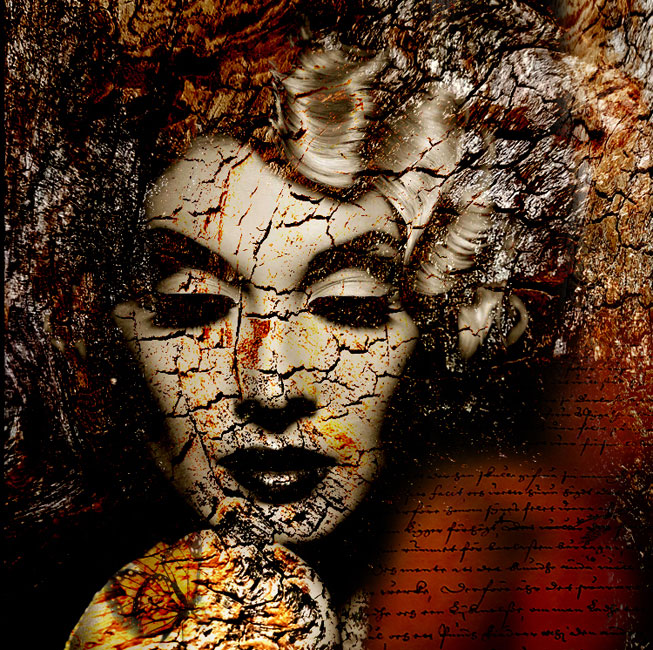 In contemporary art the contamination, the synergy, between different expressive forms has often merged to give life to new manifestations of a creative inspiration strongly oriented to singularity; fusing and associating techniques that had never previously coexisted or conceived to generate an artwork is the main feature of today’s protagonist.

Portuguese origins but Swiss by adoption, Adelia Clavien is formed as a self-taught following her own creative impulse that then becomes a real unique project in which she merges the rational process, more strictly technical, to the most emotional and existential one. She clearly chooses Pop Art, especially in the idea of reproducing iconic faces, famous in some cases, while in others unknown even if celebrating them in the same way as others, to underline that each of us hides in himself a particular, a detail, that makes him unique and recognizable among a thousand. But also for the innovation of daring techniques more distant from those common, while remaining faithful to the figuration. To arrive at the final result starts from photography, or rather from different layers of superimposed images that reveal not only details that emerge more clearly after the look of the observer has stopped on the canvas, but they also give a sense of depth, of three-dimensionality that literally attracts those who look inside the artwork. After generating the final result Adelia Clavien prints on canvas and then passes to the last phase, the one where she acts materially on the image contaminating it with materials such as acrylic, charcoal, sand, plaster, bitumen, and only after the materials have dried up, she passes the final touch of the resin that gives the work additional reflective capacity and depth.

So the Pop that merges with Neorealism, but also with the mixed technique both for the use of fragments of photos, which can reach up to ten for each work, and for the unexpected products that adelia Clavien uses to personalize, in a more incisive way, his works which are framed in the technique of Pop Neorealism. From the philosophical point of view, superimposing themes of contemporary life, breakthroughs of life in which modern man swims, such as newspaper clippings, graffiti, rusty objects, to women’s faces that lose inside the figurative noise of all around them underlines how very often it becomes easy to hide in the multitude, to become confused in the chaos of a daily life that leades people to distract themselves from a relationship with the interior which is fundamental and necessary.

Here then emerging the fragility and the silent request to receive emotional rather than aesthetic attention, which become protagonists of the opera Handle Women Marylin, where the icon seems to smile but succumbing to the woman, the real one, the one that rarely were free to be because of the duty of having to play the role of myth that felt almost like a cage.

Or in the Red Lips artwork where the woman seems to reflect and get lost in the confusion around, the news of the newspapers, the reality that quickly escapes while she seems to want to stop time, seems to say no to what she doesn’t share, with firmness but with the delicacy typical of the feminine attitude. Each of us, each person, has a side of himself that makes him unique, seems to suggest Adelia Clavien, something individual that must not succumb to everyday life and to homologation, must instead resist and continue to exist to make us exclusive, original, unrepeatable.

This exhortation appears decidedly strong and clear in the work Blue Eyes, in which the colors that surround the woman’s face seem to want to call her to them, to hide in them, represent the call of a society that strongly tends to fear those who know how to get out of the group because they will not comply with the rules imposed, will not fold up its personality to compromises that it does not want to accept; that’s why her eyes remain proud and clear at the center of the work, absolute protagonists and subjects of individuality and the ability to come out of the choir, constituted, in this case, by the stains of color, from the images below and branches that would bind her, without succeeding.

And still in IA Girl, comes out all the delicacy, the typically feminine exhortation of Adelia Clavien, a strong and positive woman, to seek happiness, freedom to be beyond appearing, to break the chains that hinder one’s individuality to look at the world with the awareness that no one can ever break the wings of the choice to be themselves. During her career, Adelia Clavien has participated in important international collective exhibitions in Venice, Rome, participation in Swiss Art Expo and personal exhibitions in Durham in North Carolina, Zurich, Lausanne.

Una serata con i talenti di Up Next Italia a Milano:...