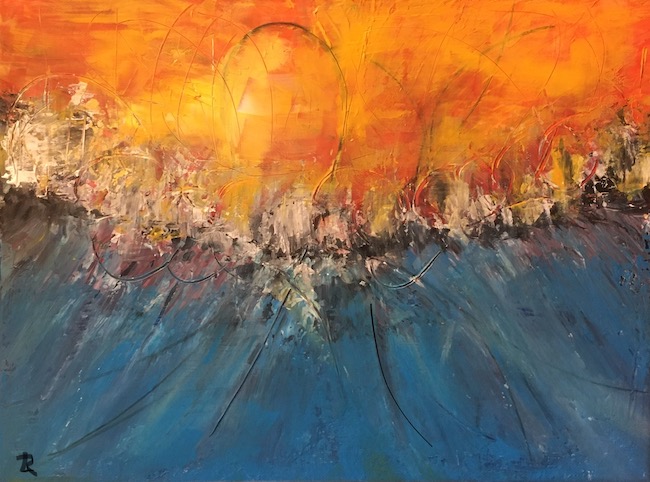 The sensibility of each artist is manifested through different modes of expression aimed at releasing emotions and inner motions that would otherwise remain trapped inside without having the possibility of making their voices being heard; often the most emblematic feature of the author of the canvas emerges, revealing his character and approach to life and what revolves around him. In the case of today’s protagonist what emerges is the need to find a balance between two different tendencies of her interiority, between opposite sensations that she seeks a way to make live together.

One of the guidelines of Abstract Expressionism, the movement founded by Jackson Pollock in the United States in the 1950s, when the artistic world of the time was still tied to the previous academic rules and therefore unable to accept the innovation introduced with the rejection of figuration and the introduction of an indefiniteness that the eye could not trace back to something known, was the importance of linking the act of painting to the emotion of the moment in which the brushes or colours settled on the canvas. So much and such was the strengh of that break, that the curators of the Metropolitan Museum excluded the group from the great collective exhibition of contemporary art in 1950, provoking their reaction, which was expressed in a letter of protest to the director of the museum and published in the New York Times, an event that gave the group the nickname of irascible but also consecrated its fame and success. That episode also underlined how fundamental and vital it was for the Abstract Expressionism movement to affirm the supremacy of colour over any drawing, figuration and academic pictorial rule, precisely because of the expressive spontaneity that that release, that detachment from the cage of schemes, gave to the artists who were part of it. From the impulse of Action Painting used by Pollock and Lee Krasner, the wife of the creator of the artistic current, to the calm and mystical Color Field of Barnett Newman and Mark Rothko and finally to the monochrome of Ad Reinhard and the signs of Robert Motherwell and Franz Kline, the common denominator was the freedom to express one’s feelings through the technique closest to one’s inner and pictorial nature. The German artist Elke Dabisch needs the stylistic freedom of Abstract Expressionism in order to liberate inner motions, those sensations that come out and materialise on the canvas without filters, without a single direction but rather by recounting the multiplicity, nuances and sometimes contradictory aspects of her nature, which is too complex to fit into a single definition and therefore a single communicative attitude. However, Dabisch never definitively renounces a light figurative stroke, a whispered image, veiled or distant almost hiding in the indefinite of the Abstract.

Her works seem to follow one another in order to find a balance, a balance between the need to let explode the most impulsive, strong and impetuous sensations such as anger, anxiety and melancholy, and other more calm, shooting and reassuring ones, such as the calm, peace, quiet that arise even just by observing a garden, a dawn or getting lost in a silence. Even the pictorial stroke appears more scratching, more incisive, in accordance with the intense and strong tones of the most turbulent emotions, while it becomes softer, suffused and caressing when instead Elke Dabisch tells of quiet moments, those that follow a darker moment after which everything takes on a different flavour, a different meaning, more vivid and involving even in its simplicity.

In the artwork Emotions is evident a complex path of the artist, who feels in the approach to the canvas the need to free everything that otherwise would remain closed within herself, thus suffocating the process of healing from wounds; the chosen tones are dark, impetuous, almost angry, with that red and black that seem to collide and chase each other to determine and emphasize an emotional storm that must live and explode in order not to implode within the sensitive and subterranean world of the soul.

And again in Lost a sense of bewilderment is clearly perceptible, an emotional darkness from which it is difficult to get out because it is complicated to be able, at that moment, to see the light, the handhold to cling to in order to find the way to resurrect and start again. In this canvas the tones are not impetuous, they are rather earthy, as if to underline a melancholy, a disorientation accentuated also by the vertical lines that seem to want to find a direction, a sense, within that solitude in the multitude that Dabisch mentions at the base of the painting, as if the sensation prevailed over the existence of that moment when everything around it almost disappears.

Then suddenly she turns towards serenity, playfulness, the unexpected smile that manifests itself in the calmer works, such as Rose Garden, where the observer’s gaze is lost in the gentelness of the colours and soft brushstrokes, skilfully guided by Elke Dabisch within an idyllic and regenerating atmosphere, an enchanted world in which none of the most impetuous emotions can reach.

Just as in Stille (Silence) the rarefied atmosphere of the entire canvas is emphasised by that distant and shy sun towards which the gaze is attracted, underlining its distance precisely to envelop the observer with the muffled sensation of that silence essential for reflection, to connect with the interior and find calm, as if the whole world, and therefore even the faint distant sun, were closed off. But Elke Dabisch also tells of cheerful dynamism, of differences and comparisons, of mental and emotional intersections that arise when men and women come into contact, struggling to understand the two different worlds to which they belong without being able to help themselves.

The canvas Mann und Frau (Men and Women), tells of those interweaving, of those differences that fill existence and that become a point of strength and a cue for enrichment necessary for the personal evolution of each individual. Elke Dabisch, addressed to painting by her husband, painter and set designer, has long abandoned her artistic inclination because of the vicissitudes of life, but in 2018 she resumed her old passion and decided to exhibit her canvases in an important solo exhibition in Los Angeles while in 2020 she participated in an exhibition in Bremen and in September she is planning one in Vienna.