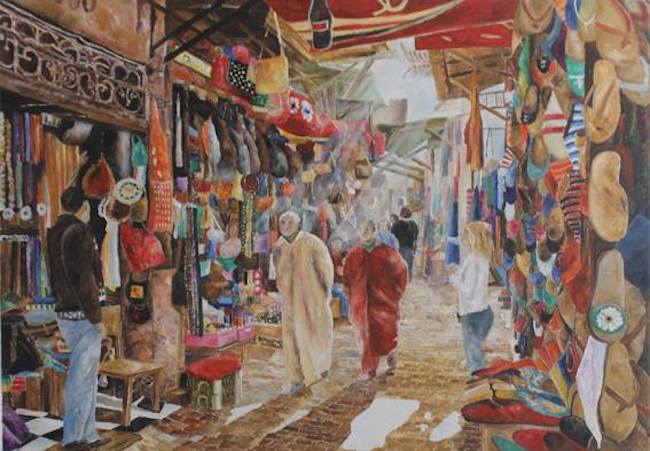 Some pictorial styles have been mostly linked to a certain historical period but, even if they have among them some of the most famous names, they have had little sequel in the following years. Mike Ferrell chooses one of these styles to outline and express his creative energy.

Today’s English protagonist arrives at painting randomly, when his ex-wife decides to give him brushes, oil paints and canvases to give vent to what until previously was only a passion, a total admiration for art so deep that he spended much of his free time to visit exhibitions. From that moment he never stopped painting, dedicating himself full time to what has become his main activity today. And he chooses a style that is decidedly out of the ordinary, that Naïve Art that had marked a deep furrow in the history of twentieth century art but that then moved away from the most contemporary forms of expression, perhaps because it was a moment of transition, the starting point of other developments that have been able to keep stronger and updated on the basis of the progress of time. The basic application of colors, the representation of the most common daily reality, the almost lack of perspective and depth, the simplicity of the subjects was often common to a dreamy, poetic, sometimes dreamlike look. Among the major representatives of this particular pictorial movement are names such as André Bauchant, Antonio Ligabue, Orneore Metelli, Grandma Moses and many artists from Latin America and especially from the Caribbean where the Naïve Art style has taken root more deeply and incisively than in Europe. In Mike Ferrell’s works is possible to glimpse the influence of Bauchant and Metelli, precisely because of his characteristic of immortalising scenes of everyday life full of people and colours, of that calm chaos that his gaze perceives as necessary to describe the places he visits, the people he comes into contact with, the vital settings in which he loves to immerse himself and go snooping. The curious and open approach to the surrounding reality gives Ferrell’s works a serene, festive, smiling atmosphere thanks to the images he chooses to immortalize, because that is precisely the way in which the artist lives, allowing himself to discover each time the fascination of popular festivals, the pleasure of the multitude in his everyday life, the passing of people who crowd the existence of eachone and enriches the experience of the individual.

Communication, the ability to connect with others is the best way to discover and know themselves, seems to suggest the artist, each place visited is a piece that helps to complete the puzzle of our lives, each individual we meet becomes a strengthening of the inner consciousness of being able to relate with an outside that becomes a fundamental means of expression and manifestation of our feelings, our most immediate emotions.

And Mike Ferrell’s emotions are positive, joyful, captivated by the enchantment of the atmospheres that appear before his eyes and that with the same simplicity and immediacy he recounts, as in the work Easter Sunday, in which he represents a religious ceremony while giving importance not only to the event itself but to the whole surrounding area, the procession of people who follow it, because that crowd, that multitude, is the reason for the importance and solemnity of the ceremony.

And again in Cafè in Ubeda, Ferrell stands outside the scene, observing it from afar, and what he sees is the joy and serenity of a sunny afternoon, in which distant people are probably telling each other, smiling and having fun, as if from the point where the artisti s he could hear the voice, the laughter, and discover himself involved just thanks to that daily image, ordinary yet extraordinary in its simplicity.

In Marrakech souk 2 also emerges the attention to small details, almost miniaturized in the characteristic typical of the Naïve Art, but that manage to make the scene alive, real, noisy as only the Arab market can be, full of the smells of spices and colors of the manufactures, in its own way perspective despite the disruption of the classical rules of perspective, even this one is a distinctive element typical of the pictorial style chosen by this talented artist.

A series of his works is dedicated to the acrobats of the circus, who seem to observe with admiration fascinated by the harmony of the bodies that twirl up, defying gravity and giving the audience below the feeling of being in front of a dance suspended in the void, empty that the artist describes with the color black, to highlight even more the plastic poses of the protagonists.

The fascination that the observer of his works receives is the same lived and felt by Mike Ferrell in the moment in which he was in front of those realities, by virtue of the communicative and direct capacity of his pictorial touch, for which he chooses oil, tempera, watercolors and ink, indifferently, listening only to the instinct and tying the type of coloristic technique chosen to the image he wants to immortalize. Currently Ferrell lives and works in Spain, specifically in Andalucia, the country of adoption in which he chose to move for the climate and the joy of the people, as well as for the breathtaking landscapes that are a constant source of inspiration for his works.