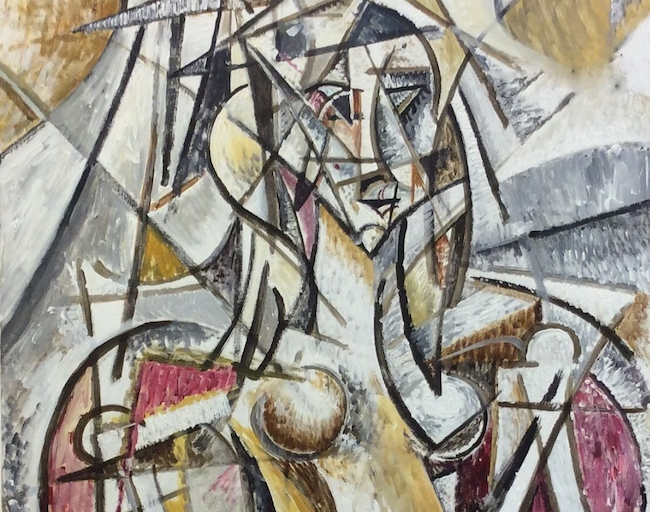 Observing reality according to one’s own interiority, one’s own feeling, is one of the essential characteristics of the artist who gives the viewer a personal or sometimes simply empathic perspective on the immortalized subject or the captured instant. There are, however, artists who have a more meditated approach to objective reality, more inclined to a study of different perspectives that lead to a particular and eccentric style linked to one of the main movements of the recent past. Today’s protagonist chooses and explores this particular style.

In the first decades of the twentieth century there was a deep split between the artists of the time, between those who wanted to remain linked to figuration despite the need to detach themselves from all the previous rules on drawing, perspective and depth, chiaroscuro and the need to immortalise reality as it was, and those who wanted to affirm the total supremacy of the purity of art which could free itself from any known form and seek the essence of the concept only through geometry, non form and the use of primary colours. The nostalgics of figuration affirmed, however, without any doubt, the urgency to experiment new and unprecedented expressive paths, more akin to the evolutions that European society was going through with the advent of technical and scientific discoveries that were destined to change everyone’s daily life. Futurism was a revolutionary movement in which the decomposition of images was theorized in order to infuse the subjects, and the observer who then enjoyed the work, with the sense of movement, speed and progress that was breathed in that era. In parallel in France Cubism was born, another movement destined to leave a profound mark in the history of world art, following an exhibition in Marseilles of Georges Braque‘s works that paved the way for a style that became famous throughout the world thanks to his other founding father, Pablo Picasso. Unlike Futurism, Cubism did not set itself the objective of seeking speed, movement, but rather took on a more contemplative connotation, more meditated on everything that was observed and on its representation, which was to induce the viewer to have all the elements, all the facets and angles in front of him simultaneously, in order to demonstrate that even through a decomposition of the image and the cancellation of the third dimension, the works would not lose their emotional impact and expressive intensity. The Austrian artist Christian Hoeld began his artistic career starting from Impressionism, in turn a forerunner of the fragmentation of the image into small, short brushstrokes of colour whose final result could only be seen by moving away from the canvas, and then gradually moved towards Cubism, which distinguishes his works and constitutes the fundamental basis for his constant research and evolution.

The chromatic range is akin to the earthy tones preferred by Braque, as is his decidedly decomposed, multi-faceted pictorial approach, aimed at exploring the observed reality in the form of geometric figures fragmented and then reassembled that fascinate the observer precisely because of their multiplicity of observation planes.

Yet one cannot fail to recognise a hint of movement that Futurism had introduced into its guidelines, especially Umberto Boccioni‘s artistic production to which some of Christian Hoeld‘s canvases seem to be linked, as Search of God and My machine is spreading my energy and changes everything, in which the image tends to reveal the sense of evolution, therefore of spiritual movement, which allows Hoeld to give a personal imprint to his artistic style. The chromatic range is widened and also includes brighter, more vivid tones, while always leaving them shaded, almost dusty, to highlight the essentiality of the geometric volumes, but the colour is not spread uniformly but in turn fragmented, using that impressionist technique he knows so well and which seems to underline his fidelity to the idea of decomposition, of the whole that only in its completeness gives back the definitive image.

In Kubistischer Manner Halb-Akt (Semi nude in Cubist style) and Metamorphose n. 2, on the other hand, he shows all his cubist attitude, underlining his predilection for softer, faint yet lively tones, thanks to which emotion seems to amplify the lines through which he narrates the protagonists of the two artworks, as if the geometrical facets that compose them represented the inner emotions and movements that contemporary human beings carry within themselves, hidden yet evident at a deeper glance.

And yet Christian Hoeld’s natural inclination towards evolution and experimentation does not stop at the two clearly recognizable styles, because in some works he tends to abandon figuration to approach abstract forms, while maintaining the geometric, linear base, as in the canvas Time in which the concept of the fleeting nature of time is highlighted, of the rarefaction and dilation within which one finds oneself living, almost forgetting that every moment will never return; this is why geometry seems to dissolve and get lost in the background, intense and present, which seems to represent life, the existence that is often lived hastily in pursuit of obtaining rather than caring for being.

In the artwork Couple in transformation Hoeld moves almost completely towards Abstraction, while maintaining thin lines that whisper the presence of the two lovers, evolving because it is only through the union of two souls that a new awareness can be created, a new way of looking at the world, which is why the artist narrates them within a myriad of colours that connect to the sensations perceived when proximity becomes an emotional amplifier. Christian Hoeld goes through Cubism and manipulates it to make it his own, but also to try every declination, every possible variation and extension based on his artistic feeling. In the course of his career he has participated in many group exhibitions and fairs in Austria and all over Europe, and has had important solo exhibitions in galleries in Vienna and other Austrian cities.