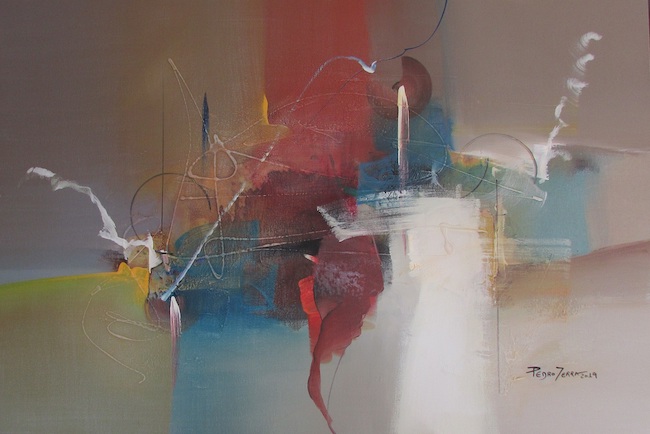 In international contemporary art scene, the synergy and the contamination between different expressive forms have become not only a way to widen the public and achieve more easily to those who otherwise would remain far from some arts, but also a means of contamination that cannot fail to generate new ways of feeling and, consequently, expressing, expanded emotions. Pedro Terra has that rare gift of using colors as if they were keys of a saxophone.

Brazil has always been seen as the musical country par excellence and also as the symbol of knowing how to live with joy and carefree but it is also a place of great and secular artistic culture, starting from the ancient pre-Columbian civilizations, of which many objects have been found bearing witness to the intense creative activity of those peoples, to continue with the subsequent Portuguese influence that brought all the artistic and architectural styles of that age to the overseas colonies: Baroque, Rococo, Neoclassical. At the beginning of the twentieth century the Brazilian artists, many of whom had moved and trained in Europe entering for this reason into contact with the most revolutionary currents like Expressionism, Fauvism, Futurism and Cubism, became promoters of detachment from Classicism to enter, as much as it was happening in the rest of the world, in the new era, Brazilian Modernism. The group of artists was initially opposed by press and scholars, however they were able to affirm their right of expression, new, different, perhaps less understandable but certainly more free from the predetermined schemes. Antonio Guerino Fonzar, born in Riberão Preto, soon moved to the great metropolis of São Paulo to study at the school of art and painting Macunaìma, after which he began working as a set designer in theaters. But then he can no longer ignore his true passion, painting, and decides to devote himself completely to her by signing himself under the pseudonym Pedro Terra; the pictorial style that he feels most kindred to his strings and his creative intensity is Abstract Expressionism, the means by which he manages to make a splendid fusion between atmospheres of strong emotional impact and a figurative musical background that seems almost to accompany each one of his works.

The stroke is slight, the colors are faded to give the paintings evocative touches, light and soft but at the same time always positive and bright, stripped of the typical Brazilian saudade precisely by virtue of that light that seems to tend towards the smile rather than the melancholy. The sinuous lines, ever present, emphasize the intensity of the emotions and act as an accompaniment to an atmosphere that links the image to an imperceptible background music, as if the notes were there, inside the canvas, to vibrate at the observer’s gaze which feels completely conquered by the magic of the works of Pedro Terra.

Paintings like Liberdade cannot miss to evoke a sense of peace, of serenity, of balance achieved just thanks to the freedom that is not a material or physical emancipation, but a liberation of the soul, of interiority, conquered at the end of a journey to sometimes difficult, but inevitable.

And again in Cores do mar, the artist tells of all the shades of that sea, far from San Paolo, but that remains the focal point for the imagination, the remembrance, memories of past moments yet so indelible in his emotional memory, described through the white of the crest of waves, the blue of the water surface and the azure of the sky, the beige of the sand and the unmissable feeling of the background sound that fills and at the same time makes the work vibrate.

Arcoiris neon is an interpretation of a modern rainbow, neon exactly, perhaps to tell how much the ability of the human being to live and see things has changed, distracted by modernity till the point that sometimes he forgets to look towards the sky, or, from another interpretation, that to looking better we can find our true colors everywhere, in any place around us because in reality they are within us.

His strong bond and passion for music are evident in the two works dedicated to jazz, Mùsico de jazz and Quinteto de jazz, in which he not only wishes to celebrate the smoky and fascinating atmospheres tipical of clubs where that music is the protagonist, but also the skill, the passion, the harmony with which the musicians give birth to incredible and overwhelming melodies. Pedro Terra is a vibrant, intense artist, able to get his message straight to the emotional chords, while not choosing a figurative style that would make it easier to be recognized because close to what the eye is used to see; however, the synergy between colors, shades, sinuous lines and evocative musical background manage to make the message clear, evident, incisive. Pedro Terra has a large number of personal exhibitions, all in San Paolo, very important cultural center and artistic reference point for the whole Brazil.