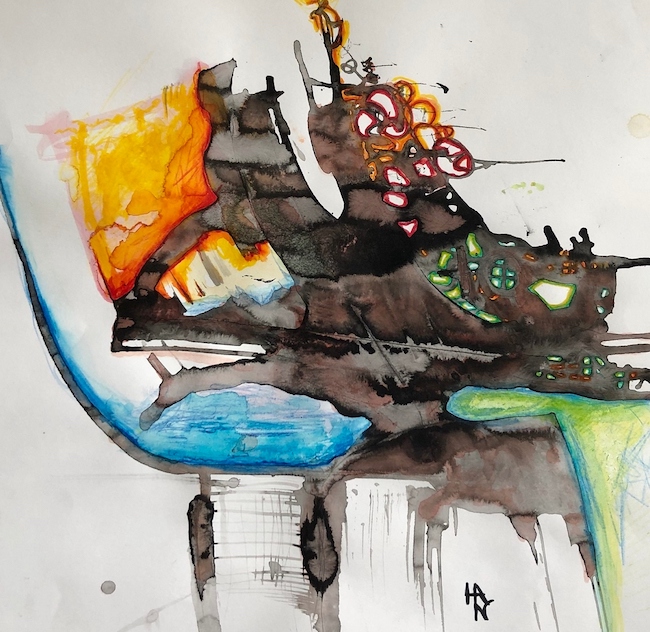 Sometimes art becomes an important and essential means to carry out a journey of deepening of an inner self that otherwise would not be able to emerge towards awareness, thus becoming a language that the artist chooses to communicate and release emotions and sensations that need to materialize on the canvas. Today’s protagonist approaches his creative impulse following this need to investigate in the folds of his soul.

Nicolas Blanquet, of Korean origins but naturalized French since the age of five, immediately choses painting as a manifestation of his artistic nature that led him to carry out research on styles related to his continent of origin, Asia, and then mix them with the more European influences that accompanied his academic training. The style instinctively tends towards Abstractionism, or rather towards that Abstract Expressionism that was so important around the mid-fifties of the last century. The movement was so epochal that it even reached China, and in particular Hong Kong, at that time an English colony and therefore a link between the two different cultures, Eastern and Western, where around 1948 was born the New Ink Painting movement of which Lui Shou-qwan was the greatest exponent, since was born a style where the ink drawings typical of traditional Chinese art, in which abstraction had always been functional to capture the essence of the subjects reproduced, were associated with Abstract Expressionism, whos informal images are enriched and invested with the most intimate and intense feelings of the artist. The rushing impetus of Jackson Pollock and Joan Mitchell, for whom the creative act was pure instinct and the canvas was simply the surface on which manifesting everything that was not measured by balance and reason, or the more meditative and philosophical approach of Adolph Gottlieb and Barnett Newman, more tied to unraveling the mystery of silence, calm and harmony mitigated by the mind, were united by the common denominator constituted by the essence of the current itself, namely the fundamental need to communicate emotions.

The artistic path taken by Nicolas Blanquet led him to search in his distant origins for a link with the knowledge acquired in France, as if his painting had to represent the dialogue between his most innate part, the one linked to the East, and the one he has always faced, that of the West; studying and researching the fascination of Chinese art, he approached the use of ink, to those abstract drawings that sink their origins so far back in time that they constituted an essential essence of the people to whom they addressed, with whom they dialogued.

However, he cannot avoid to remain strongly linked also to the fascination of Abstract Expressionism, that world in which non-form is overturned by the impetuousness of the emotions that go through everyone’s existence to the point of putting the protagonists in front of the crossroads, to the inevitable choice between resisting and getting up again or succumbing letting themselves be carried away by the current. The choice made by Blanquet has always been the first one, that of resilience, of overcoming the obstacle and coming out of them strengthened and more aware, and this is the exhortation, the message that through his works he wants to convey to the observer. Not only that, he also whispers the beauty and the privilege of being divided between two different natures, that of birth and that of growth, which can only enrich the interiority and the capacity to tend towards cultural integration which is not pure globalization but an amalgamation of points of view, of approaches to life, of multifaceted uses and customs necessary to evolve in one’s own path of growth.

The work Éclats (Fragments) tells about his feeling divided between pieces to discover, to build and to assemble in order to give life to a unique and strong identity precisely because he is aware of his own weaknesses that are not rejected but accepted and embraced as part of his completeness; and again in Fusion (Fusion) he manifests the need to recount that sensation that induces him to feel part of those two apparently distant worlds and yet in him so close to constitute a new universe within which to feel himself fully, without having to choose to belong to one or the other but recognizing them both as part of his essence.

In the canvas Rouages (Wheels) Blanquet seems to want to represent the ineluctability of destiny, that wheel of movement that leads people exactly where they need to be, whether they oppose it or not, and one can only learn to dance to its rhythm by accepting what one put himself in front of and resisting the trials he’s sometimes subjected to. Perhaps he refers to its route for discover his origins which, however, somehow escaped, inducing him to resign himself and to understand that perhaps that very impossibility was the best option for his path.

Initially fascinated by acrylic painting, he then approached the mixed technique of the current production, a technique in which he mixes ink, watercolor, colored pencils, marker pen, perhaps just to indulge his tendency towards the charm of the melting pot, the meeting point between cultures, as well as between materials, which represent the new frontier, and the new challenge of contemporary living.

Art as a message, as a discovery of oneself and one’s inner self, of one’s true essence, this is what is revealed in the fascinating artworks of Nicolas Blanquet, a sensitive but strong artist who has made the resilience and depth of one’s intimate feelings the founding basis of his existence and the fundamental message of his production. In the summer of 2018 and in 2020 he was the protagonist of the International Exhibition on Indian ink Art Résilience in Saint-Frajou; in 2019 he took part with nine artworks dedicated to resilience, in the sixth Artistic Meeting that took place at the Town Hall 13 in Paris. In 2017 and 2018 he carried out an artistic project for the creation of Chinese inks on the theme of resilience, at the 100 Solidarity Cultural Institution.