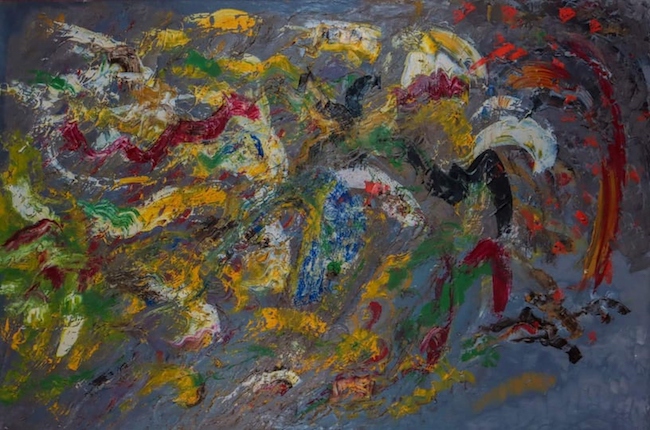 The choice to freely express sensations and emotions without having to stick to the scheme of figuration represents for many artists the maximum form of freedom, necessary to communicate everything that cannot be explained, which often does not have a full meaning but only needs to escape in order to extricate itself and emerge to the consciousness. The artist I am going to tell you about today is moving on the ground of emotional non-figuration in order to satisfy his feeling.

When in the first half of the twentieth century arose the need to affirm the independence of art from any form of representation of reality, claiming that the act of creating was already itself the purest artistic manifestation and the only one capable of moving away from contingent reality, sometimes too disorienting and sometimes too rapid in its evolution, feelings and emotions were put in the background. Abstract Art, from Geometrical to Spatialism, from Suprematism to Minimalism, omitted subjectivity to exalt objectivity, the rational study of lines and colours on the canvas to seek a purely aesthetic, mental and meditated balance, an almost scientific approach to the work that necessarily had to distance itself from all that was observable in reality. The paradox to which on came wanted to be overcome in Europe by Vassily Kandinsky who wanted to reaffirm the importance and natural tendency of the artist to infuse and communicate emotions giving life to Lyrical Abstractionism, while in the United States developed a much more extreme movement, in his return to pure inner sensation, which took the name of Abstract Expressionism. Jackson Pollock, its founder, promoted an immediate, instinctive painting, without anything being held back by the reins of rationality, in which all that was subjective, an expression of the interiority of the performer of the work, had to escape and impress on the canvas in a free, irrational, impulsive way. Action Painting was as functional to this philosophy so much as Dripping, Color Field, all techniques used by artists who joined the current, each with his own personal pictorial approach. From the sign painting of Franz Kline and Adolph Gottlieb to the irrational and impetuous works of Jackson Pollock and Lee Krasner, from the meditative atmospheres of Mark Rothko to the intimist monochromes of Ad Reinhardt, Abstract Expressionism gave artists the freedom to be and express themselves in the manner closest to their own inclination.

The Greek artist Ioannis Kaiserlis, aka KaiZer, approaches the American movement with a very singular manner, moving like a tightrope walker between the stylistic variations that have characterized it, thus creating an eclecticism that becomes his personal distinguishing mark; the ability to explore the different expressive languages corresponds to his desire to tune the artworks with the modes of expression, the sensations of the moment when he starts painting.

His sense of freedom is also manifested through the choice not to give titles to the artworks, entrusting their names to numbers because everything he wishes to tell and express must reach the most intimate chords of the observer without being influenced by the link with rationality, by the guidance of a title that could distract him from the immediate and instinctive approach to the observed canvas.

For KaiZer, Action Painting is the most appropriate choice when he wants to narrate the strongest, most intense, often confused sensations, precisely because he is impetuous in their manifestation, those that induce him to look inside himself in order to be able to free everything that would otherwise be entangled in the deepest folds.

When, on the other hand, he finds himself in a calmer, meditative state of mind, the one during which he needs to reflect, rationalise and give a name and meaning to what he feels and perceives, he approaches the signs, the grey scale, the need for a balance between canvas and emotion, between outside and inside which becomes a narration to the viewer of the artwork.

And then suddenly he moves towards a more lyrical style, almost tending towards figuration, introducing round shapes or elements recognizable by the human eye, to express lighter, more vital and amused sensations, because he feels the need to come out into the light and tell relaxing and sparkling moments, perhaps those immediately following the most collected phases, and therefore the shapes become softer, the colours more lively.

Sometimes he chooses primary colours, while other times he widens the chromatic range in order to reach the final aim, that of the explosiveness of enthusiasm, which however appears to be very different from the more impetuous and impetuous series of artworks where restrained emotions need to explode and be outsourced in any form. Finally, in the most contemplative moments, he moves towards Material Art, for which he chooses the monochrome necessary to let the object hidden in the canvas speak, which it lets himself be glimpsed to symbolize Kaiserlis‘ need to cling to a reference, to something that slows down the rhythm, that creates a friction in the fluid and fast everyday reality and that constitutes a solid base from which to examine the silent reality of the non-visible.

His emotions alternate, as much as they do in life, and therefore he cannot but tune those passages to his artistic manifestation, letting himself be guided by instinct and by the freedom to decide each time with which language to express himself, to tell his story and to communicate with the observer who lets himself be conquered by his works in an instinctive, atavistic way. Ioannis Kaiserlis arrives at art concurrently to a different yet analogous professional path, in which he has measured himself with flat design and interior decoration, fields that have led him to feel the need to express through the creative act and to discover how art is able to modify an environment through its communicative capacity and strong emotional impact.