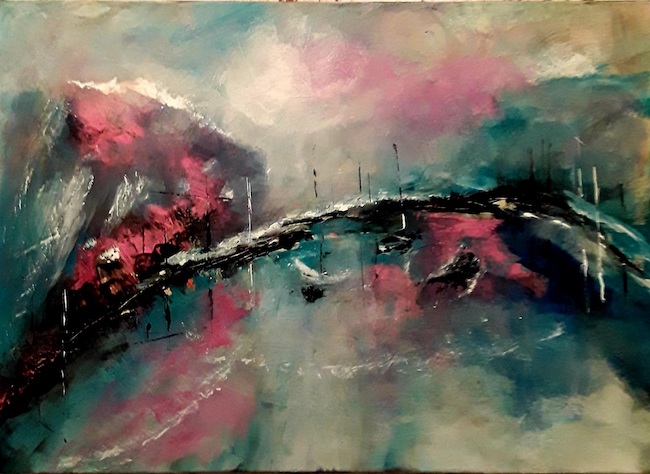 The freedom that distinguishes the contemporary artistic approach has been conquered by artists precisely because of their openness to contamination, the mixing of styles that in the previous century were confined within well-defined schemes; for this reason, the guidelines that distinguished the movements of the past now appear blurred, undefined, going beyond determinism to give life to new modes of expression based on the individual characteristics and pictorial inclinations of each artist. Today’s protagonist models the main characteristics of one of the most important pictorial movements of the past to adapt them to the sensitivity through which she observes everything that surrounds her.

Expressionism was born between the end of the 19th and the beginning of the 20th century as a current of protest against all previous art in which importance was given to form and aesthetics, to harmonic perfection, to the detriment of all that belonged to the emotional dimension and which therefore could not be manifested in an impeccable manner and perfectly adherent to reality precisely because of the confusion in which the interior finds itself when sensations arise and the disorientation they inevitably generate. Therefore, the expressionists argued, it was not possible to dwell on the faithfully described details, nor on the aesthetic balance and perspective, when feelings overwhelm and upset the soul. The result was the need to overturn the pre-existing rules, giving rise to an intense, strong painting in which the colours were in tune with the inner movement rather than with those that the eye was used to see around it, where shapes were altered and deformed, thus rejecting beauty because the urgency of immortalising those feelings prevented the artist from following the traditional schemes of depth and nuances to bring the tones closer to the real ones and to the light, as in the case of contemporary Impressionism. Clean, sharp contour lines, faces drawn only in the basic essentials sufficient to describe the emotional moment, nature and objects that could not fail to accord with the rich, restless, intimate world that the artist felt he had to impress incisively on the canvas. The anguish of Edvard Munch, the naive madness of Vincent Van Gogh, the human frailty of Oscar Kokoschka, the desolating sadness of Carlo Levi‘s people, the rarefied landscapes of Emil Nolde, all characterised and engraved the importance of Expressionism in the history of art throughout Europe, before evolving towards a dissolution of the visible and arriving at the pure emotionality of Abstract Expressionism. The impetuosity of the 20th century gives way in the present to a different kind of approach, more in tune with the individual expressive personality of each artist, who no longer necessarily has to adhere to clear, rigid guidelines but can mix heterogeneous languages in his style, capable of harmonising and interacting with each other in a spontaneous manner, generating an unprecedented richness and creative versatility that distinguishes contemporary art. German artist Elke VonderOsten transforms Expressionism, mixing it in some works with traces of Realism, tuning it to her delicate personality, capable of glimpsing the wonder behind every single detail which in her canvases becomes a poetic accord, an atmosphere suspended in time which cannot fail to involve the observer.

The emotional veil that pervades her canvases is not impetuous or stormy, quite the contrary, it seems to be the filter through which the artist observes the world and thanks to which she is able to bring out the overall chord, that harmonic symphony that allows her emotional chords to vibrate and reveal the sense of the landscape and the object observed in its entirety, for the effect that the encounter with the gaze has generated.

VonderOsten moves from the more figurative Expressionism to a more Abstract one, as if in some works the limit of figuration were a cage too narrow to be accepted by the sensations triggered during observation, as if some emotions needed to flow freely without the constraint of the image which, instead, becomes essential when the artist feels the need to link the emotion to the moment in which it emerged, enveloping it.

In the canvas Calla VonderOsten reveals all the delicacy of a flower on which she cannot help but dwell, celebrating its elegance but also its capacity to arouse intense feelings in her, perhaps because it is linked to a memory, a juncture in her life in which the presence of the flower has left its mark on her interiority; this is the reason for the carmine background, the colour of passion, of the depth of a feeling that seems to be tattooed on the emotional treasure chest of her soul.

And again in Der Schwan (The Swan), the image of that flight tells of the need for freedom, of the capacity to rise from the ground without fear of chains that might hold back that impulse; it is for this reason that Elke VonderOsten chooses to immortalise the most regal of birds not in the classic and aesthetically most symbolic moment of when it sails in the waters of the lakes, but in an unusual juncture, that in which it opens its wings and seeks the sky. A dark sky, almost as if the risk of rising up and finding the courage to break free from the imaginary cage represented a warning to the artist, a risk that must be faced if freedom is to be achieved.

Admiration and involvement are instead the feelings that emerge when observing the work Skyline, where the stroke of the drawing defines the contours and the fundamental details necessary to be the protagonists of the sensations felt in the instant in which the artist found herself in front of that fascinating city profile, where lives are intertwined within the noise, the traffic, which however seen from a distance appears silent, as if it were posed to show its best side.

However, when VonderOsten‘s emotions become more interior, more tumultuous, the need to abandon figuration is indispensable because not everything can be outlined and defined: in the canvas Twister the artist seems to want to describe an impetuous, agitated state of mind, one that is impossible to make sense of until it can be rationalised and internalised. The atmospheric phenomenon of the title thus becomes a metaphor for an intimate restlessness that cannot be explained except by allowing oneself to be dragged along by its vortex and waiting for it to pass, to settle on the ground, allowing one to take note of what has happened. The tones chosen are in perfect harmony with the sense of restlessness that the artist wishes the viewer to perceive.

As in Music liegt in der Luft (Music is in the air), where the colours and lines seem to want to be transformed into musical notes, apparently confused and disordered but with their own harmonic sense that can only be appreciated by listening to them as a whole. Elke VonderOsten actively participates in many group exhibitions both in Italy and Germany, where she lives and works.