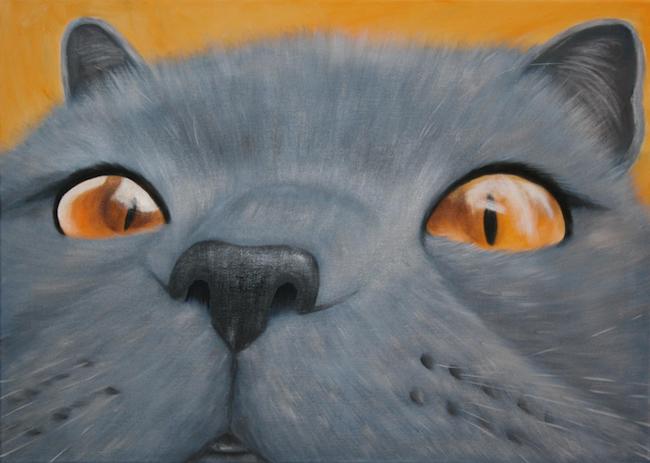 Painting is often a means to express hidden concepts, to dig into an interiority that otherwise would not be able to free itself; just as frequently it explores discomforts and fears of current life from which the artist seeks a way to rise and find a personal world in which to take refuge. And then there is that category of creatives for whom painting is only an extension, or rather a story in images, of an approach and a look already perfectly clear in the personality of the author of the artwork. This is the characteristic of today’s protagonist, the ability to immortalize in her canvases all that she loves to surround herself with and that makes her continue to smile.

Realism was born around the mid-nineteenth century, spreading rapidly throughout Europe to affirm the need for art to remain faithful to the images that could be seen through the eyes in everyday life; this was the style chosen by the noblesse of the time to order portraits and family scenes made especially in the interiors of homes. The artist was therefore a reproducer of visible reality, who adhered to well-defined schemes about chiaroscuro, perspective and the importance of bringing out the beauty of the subjects immortalized. However, the attention to detail and the need for aesthetic research were soon enriched with historical meanings linked to modern society and its strong evolution, as in the case of the famous Pelizza da Volpedo but also in Diego Rivera‘s Mexican muralism, while another group, the one that saw its origins in the Barbizon School of which Camille Corot was the major exponent but which later found space overseas with American Realism, turned towards landscape narration or the swarming life of cities. Despite the detachment from purely figurative painting, if not with the existential meanings of Metaphysics, which occurred throughout the first half of the twentieth century, contemporary art has instead marked a return to that approach faithful to the visible through a new Realism enriched by emotions, sensations, a feeling in which the artist gives the canvas atmosphere and softness of his fascination with what he observes.

The German Ingeborg Saes, an artist with a very long career, after attending courses with the greatest masters of her country, chooses Realism as an instrument of expression of her way of seeing and interpreting life, a sunny approach oriented to good living, to tell colors and places where she feels at ease that give her the serenity she needs, transforming painting into a natural manifestation of her sunny and positive character. On one hand, places that have aroused emotions remained for a long time in the treasure chest of her memories and of which she loves to tell the details that struck her the most, on the other hand, the animal world capable of instilling a feeling of peace precisely because of the spontaneity and simplicity that derive from the instinctive behavior of animals that she makes protagonists.

What is striking about Saes‘s works is precisely the definition and attention to detail accompanied, however, by an expressive softness, a delicacy in the application of colour capable of infusing the subjects with an atmosphere that is sometimes suffused, sometimes fresh, and in some cases amused by what appears before her eyes.

In the artwork Altes Fenster (Old Window) Ingeborg Saes’ gaze dwells on the foreshortening of a small, ancient alleyway while her attention is captured not only by the window but by everything that frames it, the vases with the flowers, the climbing plant, the rosy colour of the wall, as if they were all elements of an orchestra that need to be together to compose the visual melody of the image that struck the artist’s emotion.

And again in Welle (Wave) what the narrative attention focuses on is not the surrounding environment that is barely hinted at, but rather the ripple of the water, the foam that explodes when the wave descends; that is the main particular of the canvas, that impetuous movement of the water, the artist’s admiration for a natural and common phenomenon, yet capable of becoming the protagonist precisely because observed in all its majesty, in the detail of everything that often escapes from one’s attention.

When Ingeborg Saes prepares to represent the animal world, that mysterious kingdom yet able to give unconditionally without using words, the Realist approach becomes more incisive, richer in details, particulars that reveal the artistic skill of this painter.

As cat lover, she dedicates to this feline an entire production of canvases in which she tries to explore and describe their expressions, singularity, fascination, and the ability to soothe, to calm through a single glance.

The energetic connection, the unreserved love of Saes towards cats is manifested in the light touch with which she describes their gaze, their soft fur, and the enigmatic immobility that often distinguishes them; just as evident is the ability to immortalize that animal kingdom that is perhaps after all a sincere and spontaneous oasis in which to take refuge from the masks and shadows of contemporary interpersonal relationships. Ingeborg Saes has a long artistic career behind her, during which she has exhibited her artworks all over the world, from Japan to Portugal, from India to Denmark, from United States to France, just to name a few, winning numerous prizes of international importance; she is a member of the Salon Société des Artistes Indépendants in Paris, the Kitz Art Kunstverein in Kitzbühel, the Salon Art’East, the Vittel, Pastell Guild of Europe in London, the Artfactory in Graz, Verein Artstages and Anime Senza Voce.