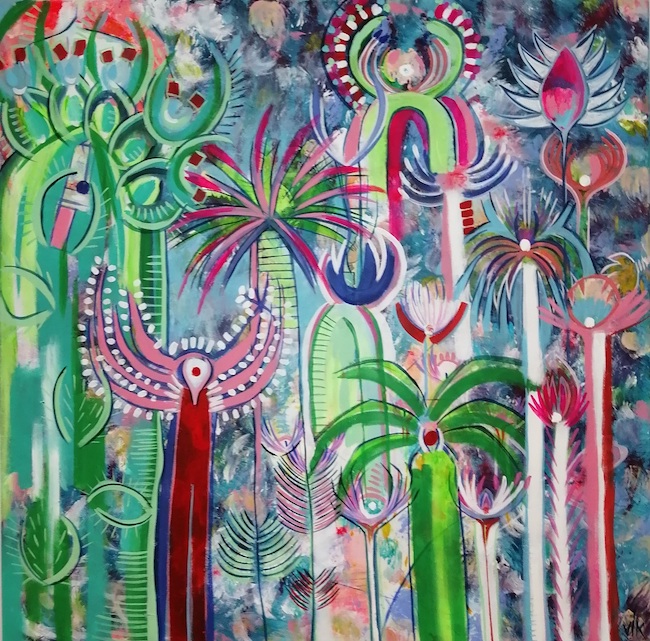 There are pictorial currents that have made the simplification of figuration their fixed point, in the conviction that emotional vibrations can be expressed and listened more incisively by virtue of an essential and stylized sign that is able to reach directly even those who find themselves in front of art by chance or those who approach it in an instinctive way and therefore manage to receive a message that comes out just as spontaneously. The artist I will tell you about today is inspired by those great artists who have made expressive simplicity the fulcrum and the distinguishing mark of their production.

The artistic panorama of twentieth century has brought enormous innovations throughout the history of art, perhaps it was the century that most of all constituted an epochal change in the way painters which from that new wind had been conquered, approached the canvas. All the classical schemes of perspective, of adherence to observed reality, of tendency towards an aesthetic that was necessarily to permeate the artworks, were revolutionized during the twentieth century and the new and initial points of view laid the foundations for all the evolutions that followed, in a frenetic and unstoppable way, to characterize that era of change. In particular, Expressionism affirmed the importance of colour over form and over the aesthetic reproduction of reality, because it was only through strong, often unnatural tones that emotion was able to burst out of the canvas and find its own solo voice; another fundamental characteristic of the movement was the simplification of the subjects depicted, the loss of attention to realistic detail that could not harmonize with the impellence of releasing strong sensations that did not want to be mediated by the balance of the slow rhythm. Edvard Munch‘s gloomy atmospheres of existential fears were flanked by Ernst Ludwig Kirchner‘s lighter and more joyful ones, Vincent Van Gogh‘s bordeline atmospheres on the edge of madness coexisted with Erich Eckel‘s more mysterious and disturbing ones, all with the common aim of recounting pure, immediate, at times primordial emotions. The trace anticipated by Expressionism will then be resumed and re-proposed in a key perhaps even more simplified by a part of the Graffiti art of the eighties that had as its greatest exponent Jean-Michel Basquiat; his essential language, signic, almost childish, was functional to shout loudly the anger, social discomfort, injustices that he saw occurring daily in the streets of New York because of the color of the skin, sexual orientation, marginalization caused by drugs.

The style of Vik, born Virginie Gouarde, is linked by expressive choice and pictorial style, to that of Basquiat as well as to that of the French Jean François Pellarey, leaving aside the anger, the need for social denunciation and the expressive violence of the first one and the anguish that permeated many canvases of the second one, to elaborate a new concept, intedited, in which simplicity becomes the means for a serene story, to describe moments or manifestations of moods of the subjects represented. Subjects that very often belong to a dream, to an unconscious world that comes out of Vik‘s interiority in a completely irrational way, almost as if her conscious part was stepping aside to leave space to an instinct capable of giving life on canvas to people and atavistic memories because they were never really experienced.

The female faces tell of amazement, surprise, expectation, in a direct and easily understandable way thanks to the clean, sober lines, stripped of every detail that would distract from the message that must be the core of the artwork.

The tones in the portraits are cold but soft, tender, almost as if to represent the reassuring outline for an emotiveness that sometimes frightens first those who feel it, and so those downy colours seem to act as a cushion for the sensations perceived by the protagonists.

Then, as if she were transported into an unconscious world of dreams and visions, Vik moves her production to distant countries, full of folklore and bright, vibrant, intense tones, places with which she feels an underground yet strong bond present and so real that she can describe sensations perceived only through intuition, imagination, connection with a soul that is connected to a past life but strongly linked to the present. In her artwork Connection entre montagnes et temples sacrés (Connection between mountains and sacred temples), it is evident the emotional approach that Vik has towards a culture that is far away but somehow she feels it belongs to her, the colors tell the sacredness and strength of a nature that welcomes and preserves memories of a people and its most significant traditions.

And again in Fête et rêve au Mexique (Fête et rêve au Mexique) the vivid colours of a sunny, tranquil place, at the same time full of life and strongly bound to a folklore that tells its history, customs and beliefs, such as that of Santa Muerte, which emerges clearly from the composition of the artwork and dominates, by observing them, the underlying symbols that probably represent the human being and the course of his life.

Therefore, Expressionism in the use of colours, Graffitism in the description of images and symbols of the reality she dreamt of or remembered from a remote past, characterize the immediate and communicative style of Vik, a French artist living in the Basque Country, who studied for a long time Art Therapy and Morphopsychology in Bordeaux and for whom art is not only a way to manifest one’s emotions but also a means to remain in connection with that unconscious universe that binds her deeply to unconscious yet incredibly strong origins. Vik regularly exhibits at artistic events in the Basque Country and the High Pyrenees, in her atelier in Tarbes and in various cultural spaces in that area.