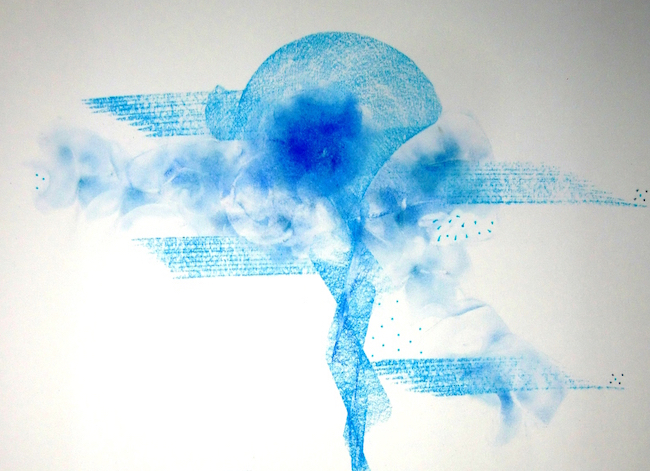 Sometimes contemporary living generates a desire to escape to idyllic, light and dreamy atmospheres necessary for some artists to express their interiority, a delicacy of soul that needs to abstract itself from reality to find its own dimension. The sensitive today’s protagonist tells us an ideal world halfway between dream and conscious imagination.

Abstract Expressionism was the pictorial movement that most of all gave the adherent artists the greatest stylistic and creative freedom, precisely because of that desire strongly conveyed and subsequently theorized in the guidelines by its founder Jackson Pollock, not to have rules, not to adapt to schemes and norms that would imprison the free emotional exteriorization of every exponent of that great current. The imperative was the expressive intensity, sometimes narrated with irrepressible impetus as in the case of Action Painting, others told with soft notes as in Helen Frankenthaler‘s paintings, or more meditated as in Mark Rothko’s Color Field or even more rigorous as in Barnett Newman‘s monochromes, All of them, however, under the common denominator of openly manifesting the deep and instinctive sensations that the artist could not, and did not want, to hold back, let alone relegate within the cage of aesthetic or stylistic principles and canons. Among the various exponents of Abstract Expressionism there was one in particular Cy Twombly, who chosed lightness as a distinctive feature of his pictorial style, a choice that made him indefinable, almost a voice out of the chorus compared to the other exponents of the movement in which the sign was more and more marked, more decisive, contrary to the feeling that comes from transparency and volatility. The characteristic of this great artist is the same that distinguishes Melinda Barwanietz Bezeredy, but she goes beyond the concept of lightness and exalts it, even making the figures themselves impalpable, giving them that veil of translucence through which the artist shows the delicacy of mind and sensitivity with which she looks at the world around her.

It almost seems to be an exhortation, hers, not to leave out the small details, those pills of simplicity that too often get confused within the complexity of contemporary life, those soft colours that are essential shades of strong colors of an aggressive everyday life, often impetuous and overwhelming, which leads the individual to get lost in the pressing rhythms to which he must necessarily adapt. It seems almost inspired by Japanese Ikebana, the art of arranging cut flowers to enhance their beauty and sweetness, Melinda Barwanietz Bezerdy for her gentle touch in telling an ideal world in which to take refuge and let oneself be carried away to welcome the pleasantness and sense of abstraction that is absorbed by it.

Works such as Blue Harmony, with its shades of a light blue that ties in with the world of the imaginary, Bolero in which unreality is accompanied by beauty to give life to a form that seems to want to attract the viewer wrapping him with its voluptuous and soft curves, and New Lives where the apex of the composition becomes the bud of the new life of which the title speaks, an explosion born from the underlying lightness to testify that the beautiful, the good, can be born even when the base is not as solid as you think it should be.

In the work Whereto, belonging to the theme of allegorical female portraits, the artist narrates about a woman when she becomes aware of her own disorientation so she portrays her in the moment before she becomes conscious of what her next destination will be, the direction to take, the new path to follow in order to find the future she is heading towards.

And again in Meerskat, which belongs to the series of drawings, Melinda Barwanietz Bezerdy chooses to narrate a chimerical place, a futuristic construction in which to take refuge to fully enjoy the promise of serenity that seems to enclose within it, where there are no clouds, noise and smog around, but only the enchantment of flowers and the harmony of a universe suspended between lightness and beauty of what is around.

Bezerdy is an experimenter by temperament, she uses materials that go beyond the classical schemes, the base of the works is mainly paper, an impalpable surface as the result of her creative flair, on which she works mixing coal, chalk, pastels, pencil, through a quick and instinctive gesture that requires a lot of precision because the sheet can not have erasures or smudges. A personal and unique technique through which Melinda Barwanietz Bezerdy creates works capable of transporting the observer into a dimension as unreal as desired for the feeling of ether peace in which the artist places its impalpable figures. She immediately began her artistic career by undertaking academic studies in Budapest, her hometown, and completing her training at the Academy of Graphic Art Design in Darmstadt, Germany; during her career she took part in group exhibitions all over the world – from Mexico to Argentina, from Finland to the United States, from France to Italy and again in Austria, England, Switzerland, Germany and Hungary – and in 2016 she won the Art Contemporain International Award at Point de Roide in France. She currently lives and works in Heppenheim, Germany.