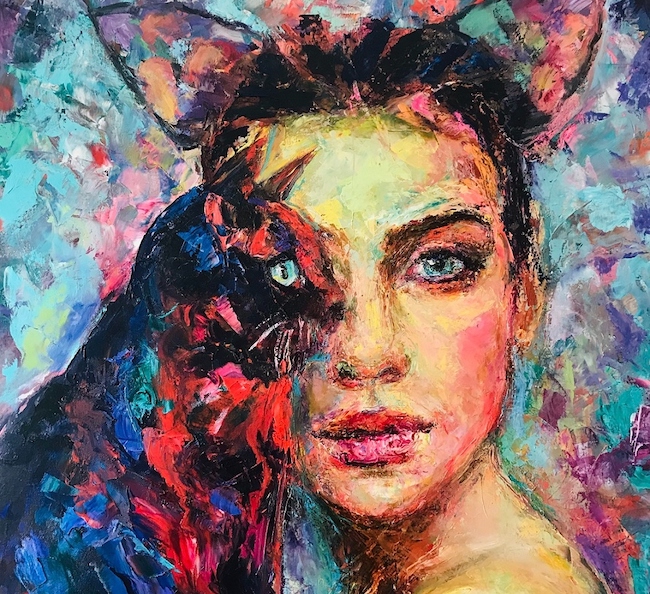 The portrait for some artists is a way to get out of one’s own point of view and narrate that of another outside oneself, interpreting the most hidden expressions through the filter of one’s own sensitivity but also trying to capture that detail, that particular instant in which everything is revealed. For the artist I am going to tell you about today, describing a face means opening up to the inner world of the subject, to those sensations that are amplified by virtue of a fragment, of a circumstance lived or intuited, and that are linked to others which are able to reveal the varied range that constitutes his personality.

Until the whole nineteenth century, so before photography was used on a large scale, the pictorial approach was the only way to immortalise images of loved ones, family members, or simply to leave the heirs a memory of themselves, of their appearance; the noble salons of Europe at that time were full of portraits by the most sought-after and courted artists, because having one of their works was an essential habit. Piero della Francesca, Sandro Botticelli, Leonardo da Vinci, Titian, Jan Van Eyck, Albrecht Dürer, and again Van Dyck, Pieter Paul Rubens, Rembrandt, Gian Lorenzo Bernini, were just some of the great masters of the pre-twentieth century who dedicated themselves to portraits, trying to leave images closer than possible to the reality observed, according to the classical and academic rules that their time imposed and that the clients requested. Already with the Romanticism of the first half of the Nineteenth century, the tendency to immortalise ordinary people, observed during the daily life, began to assert itself, as testified by many works by Francisco Goya and Théodore Géricault. The most significant step, however, occurred after Realism, when the theory of the decomposition of the image, of pictorial fragmentation, became an essential and indispensable characteristic of Impressionism. The greatest artists of the late nineteenth century adhered to this movement, many of whom were requested by the new emerging bourgeoisie, who wanted to appreciate an auteur portrait to celebrate the prosperity achieved with their business; Édouard Manet, Pierre-Auguste Renoir, Edgar Degas and the greatest Italian impressionist Giovanni Boldini, were among the most sought-after and acclaimed by the merchants and lords of the main European cities. And it is precisely to the theory of Impressionism, that of breaking down the final image into small touches of colour to widen its sense of movement and to capture more details, light and tonality, that the artistic production of Inna Hammann, a Russian but naturalised German artist with a long pictorial career behind her, is inextricably linked. For her, faces are essential to open the door to the inner world of her protagonists, an emotional universe that does not stop at the chosen moment, at the present juncture, but rather expands and propagates towards a deeper, more multi-faceted and kaleidoscopic interior precisely because it belongs to a single and unique personality.

The chromatic range is instead detached from the colouristic realism and the search for the aesthetic luminosity of Impressionism, to leave space to the emotionality and intense notes of Expressionism, necessary for Hammann to penetrate those intimate folds that go beyond and creep in to delineate the point of view, the look towards life of each of the characters she chooses to narrate.

In accordance with the positive approach to the artist’s existence, that positivity that induces her to always seek and find the subtle thread of happiness that belongs to each individual, although many tend to forget it or put it in the background with respect to the complications that everyday life presents, each of her works tells of a serene, relaxed, jovial and often dreamy moment of the faces of which she grasps the wider meaning, the essence rather than a form that is not as important as one tends to mistakenly believe.

In the artworks dedicated to the seasons, Die Frühling (Spring) and Hallo Autumn, she exalts the expectation of the new that is coming, that moment of passage and change that always brings new opportunities, unexpected beginnings and pages to start writing again. Both women, Spring and Autumn, are in fact told through an expression of trust, of hope that this transition will lead them towards a dream to come true, towards colours that are regenerated and able to give a wind of novelty to life. So the trend towards evolution is even able to soften the arrival of autumn, often considered sad because of the rains and the falling leaves, because for Inna Hammann what counts is to let oneself be carried away from the positive energy of transformation that can only lead to a new road to be taken.

And again in Melody of a wise heart, the artist highlights the poetry that transpires from a man who has lived and seen so much, someone who has understood a lot and who has learned to take all the good that existence gives because after all, the time we are given to take advantage of the gifts of our passage is short. This is why she seems to suggest, with all the facets of that relaxed and smiling expression, that it is necessary to appreciate every single happy moment and leave behind everything that can make us feel sad, because in the end those moments exist but pass and do not identify us. It is a good world that Inna Hammann dreams and imagines, an ideal place where simple things should be amplified until they become the basis of a society that often forgets them to the point of making them marginal, when instead they should be central, essential bases for a better life.

This kind of message, this philosophical thought of the artist is revealed in each of her portraits but, in particular, in the paintings Hope & Heart and The Goodness will save the world, where hope and the task of building a new future better than the present is entrusted to the children of yesterday and today who, in their innocence, have the ability to see the positive side of everything and the spontaneity to bring it to light without ulterior motives. During her long artistic career, which has continued unceasingly for forty years, Inna Hammann has taken part in numerous national and international group exhibitions and has been a great success with both the public and the critics.