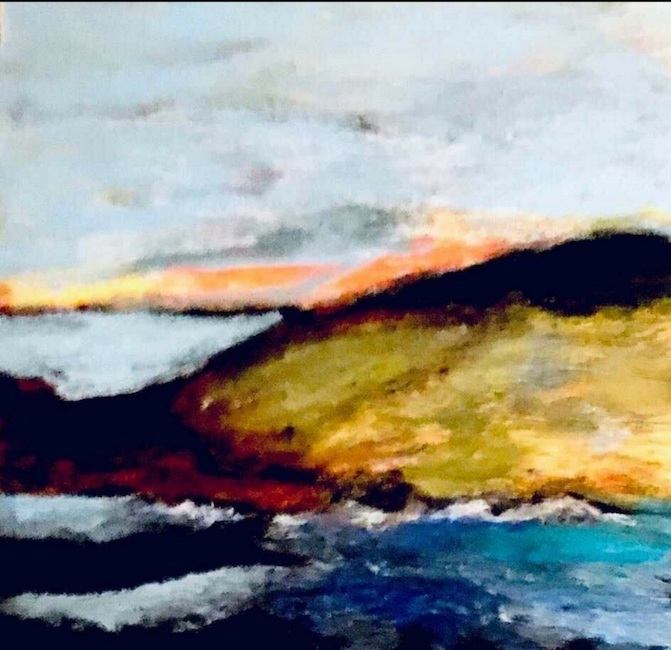 Some painting currents have been rapid meteors in the history of art and yet capable of leaving a deep mark from which successive movements have developed; although they have been fundamental more for the innovation they have introduced than for the number and relevance of the artists who have joined them, there are some painters in contemporary art who have adopted exactly those guidelines to characterize their artworks. Today’s protagonist has chosen this particular path.

At the beginning of the twentieth century and for only two years, spread in France a painting current that never had a manifesto nor did its artists ever constitute a solid and homogeneous group because, by virtue of their initial experimentation, many of them turned towards other forms of expression that managed to consolidate and be much more lasting. However, the current called Fauvism, gave a real shake to all the previous research on colour and structure of the work of impressionists but also of the contemporary nordic expressionists who permeated their works with a sense of existential anguish. The Fauvism, literally beasts for their overwhelming approach to the canvas, were characterized instead by the attention to the emotional purity of colors, to a simplification of forms necessary to infuse and focus attention on the unnaturalness of everything that escapes the rules of rationality; the cancellation of perspective, chiaroscuro and the presence of a marked contour line were themes taken up and developed by european Expressionism and then modernized in the style of many contemporary artists. Henri Matisse, André Derain, Henri Manguin, upset the French salons of that time with their landscapes in intense, vivid and lively colours, completely detached from reality except for the idea that those places remained impressed in their emotional memory. Elfriede Bachmeyer, an artist originally from Upper Austria, spontaneously approached the poetics of the Fauves by impressing in her works unreal but at the same time strong, involving tones, as if from nature and whatever she sees, she’d want to draw only and exclusively those intense sensations that must reach the canvas only after being filtered by hers interiority. Bachmeyer arrived late to painting, only in 2002, but from that moment she was unable to retain her creative impulse which led her to follow numerous painting courses and to give life to her distinctive and involving style.

The strength of the chosen colours tells of the positive energy of the artist, of that overwhelming charge from which she feels wrapped in the moment when her gaze rests on the landscapes and that then comes out in the form of full tones and outside of any traditional canon; the reds, yellows, blues are used in a full, decisive, almost impositive way because after all, Bachmeyer suggests, it is not so much the image that remains, but the memory of the sensations from which we felt transported. The work Abheben mit Balloon (Take-off with the balloon) represents the subtle restlessness but also the enthusiasm of that ideal flight towards the sky and above the earth, from which we can observe endless landscapes and at the same time understand the dimension of the human being if compared to the nature that welcomes him and that he himself inhabits.

As in Die Neugierige (The Curiosity), the artist cannot help but emphasize the character’s gaze, that lively and attentive eye that distinguishes people who are particularly interested in everything that happens around them, an attitude that can have positive but also negative implications if it turns into interference in other people’s lives; this is why Elfriede Bachmeyer surrounds the character in yellow, the colour of wisdom and intellect, and then uses blue, linked to meditation, for the dress but fills the hat with red, the ambivalent shade that has both positive and negative in itself.

And again in Sehnsucht (Nostalgia) she tells the protagonist through the nuances more linked to the inner world, to the soul that sometimes tends towards what it has lost, or that is simply far away, and that forces the protagonist of the painting to turn her back on the present by virtue of that past, or that focal point of her feeling, which she cannot help but keep linked to herself, to her present. But it is in the landscapes that Bachmeyer reveals her strongly Fauvist imprint, in that sense of unreality of which she permeates places, sometimes imaginary other times lived and indelible in the emotional treasure chest of her memory.

Das blaue Dorf (The Blue Village) seems to come out of a fairy tale, belonging to a fabolous dimension within which Elfriede Bachmeyer gets lost, leaving aside a rationality that often constitutes a limit and giving the work the bright tones of a moment of enchantment that has stratified in her memory.

Or in Sonniger Wald (Sunny Forest) where the chromatic range seems to underline and emphasize the presence of a sun capable of illuminating and instilling warmth in the trunks and leaves of tall trees and at the same time giving shade and coolness in the light pavement of the avenue in the foreground. The strong and vibrant colors are therefore at the service of an exciting, positive, energetic world precisely because it is centered on the need to tell, but perhaps it would be more correct to say to shout, all the emotions that often remain inside, get stuck in a shyness, or in an expressive privacy, which instead in Elfriede Bachmeyer needs to explode. As disruptive in her painting as moderated in her appearance, Bachmeyer has three important group exhibitions at Ludwigsburg Castle, a splendid enchanted corner set in southern Germany.